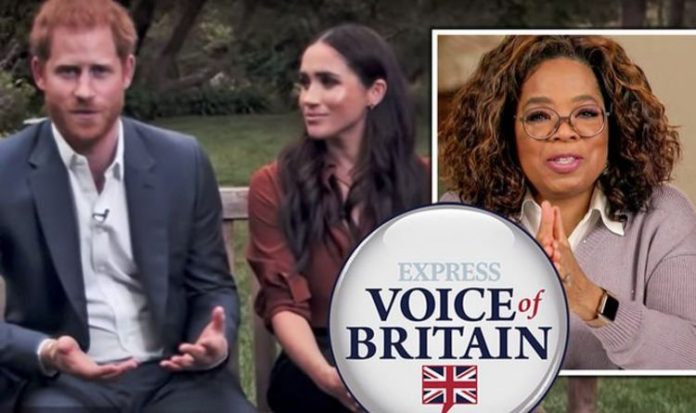 The tell all interview will be shown on US television next week and a date for UK broadcast has yet to be finalised. But an exclusive Express.co.uk poll found there was little appetite for the programme among Express.co.uk readers.

I will be too busy cleaning the toilet, that’s my choice

The survey found 89 percent (8,745 people) said they would boycott the interview.

One reader said: “I will be too busy cleaning the toilet, that’s my choice.”

Another said: “Definitely will not watch it and it will be almost impossible to avoid hearing about it.

“So much so, I will have to avoid watching the news afterwards because that pair are continually seeking publicity to make money – significant millions never being enough for them.

Meghan and Harry have come under fire for agreeing to the Oprah interview (Image: PA)

Meghan and Harry left the UK for a new life in California (Image: PA)

Another said: “More will never be enough for either of them! They are too stupid to know Oprah uses every one until the next idiot talks to her, thinking it will help them.

“I never have watched her show and this one will not change my habits.”

And another said: “I would rather watch paint drying than watch this drivel.

“Never liked this Oprah woman anyway, all she will do is stir things up.”

The interview marks almost a year since Megxit on March 31 when Meghan and Harry quit royal duties for a new life in the USA.

Earlier this month, the Duke and Duchess of Sussex confirmed they would not be returning as working royals.

Former actress Meghan will open up to Oprah about joining the Royal Family.

She will then be joined by Harry to discuss their move across the pond and future plans.

US television network CBS described the programme as an “intimate conversation”.

It said in a statement: “Winfrey will speak with Meghan, the Duchess of Sussex, in a wide-ranging interview, covering everything from stepping into life as a royal, marriage, motherhood, philanthropic work to how she is handling life under intense public pressure.

Oprah, who has interviewed countless celebrities, attended Meghan and Harry’s royal wedding in 2018.

She reportedly met the ex-Suits star just once before the big day.

Meghan and Harry have just been stripped of their royal patronages (Image: PA)

Since quitting royal duties, Meghan and Harry have set up home in an £11 million mansion in California with their young son Archie.

The pair are also expecting their second child.

As they launch new careers, they have signed lucrative deals with Netflix and Spotify to make shows and podcasts.