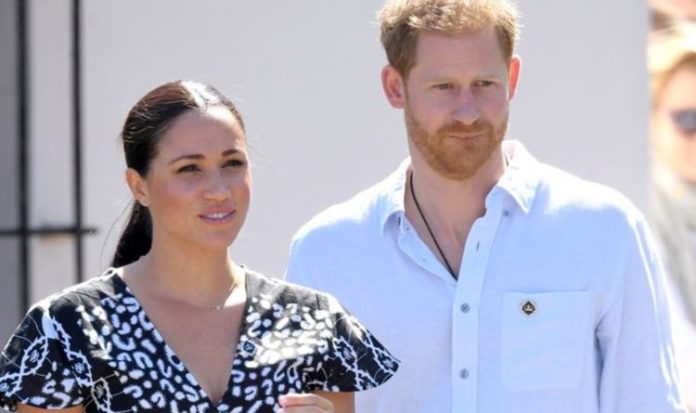 Meghan Markle and Prince Harry will still be using Frogmore Cottage as their UK base despite reportedly allowing Princess Eugenie and Jack Brooksbank to move into the Windsor property ahead of the birth of their first child next year. The Duke and Duchess of Sussex would have been back in Britain “much sooner”, but were prevented by the coronavirus crisis, according to royal commentators. ITV Royal Rota hosts Chris Ship and Lizzie Robinson discussed the practicalities of the royal arrangement.

Mr Ship told listeners: “We were told by a source in Harry and Meghan’s office that they would have probably been back here much sooner had it not been for Covid.

“In any case, it’s the kind of place that they would have to stay if they were going to come over for the court case, which we now know has also been delayed.

“So Frogmore Cottage might get a bit crowded if Harry and Meghan do want to come over for a little stay in the UK because they’re going to bunk up.

“We’re told that Frogmore remains the Duke and Duchess of Sussex’s residence in the UK and they will retain financial responsibility.”

He continued: “They are ‘delighted’ to be able to open up their home to Princess Eugenie and Jack as they begin to start their own family.

“But they will also stay with them when they’re over here.

“The baby’s due in the new year in the spring so you could end up with Harry and Meghan and Archie, and Eugenie and Jack and their baby all shacked up in there.

“The property was originally five separate cottages and I’ve read that it’s got something like five bedrooms potentially.”

She told listeners: “Eugenie and Jack can go and see Prince Andrew as much as they want, as well as Sarah, Duchess of York.

“It does just seem like a very sensible thing to do.”

The podcast hosts also discussed the potential financial arrangements between Eugenie and Jack and Harry and Meghan.

Due to the Sussexes’ recent procurement of a multi-million dollar deal with US streaming giant, Netflix, it could be that the move is rent-free.

Mr Ship added that the whole situation is going to be “quite interesting”.