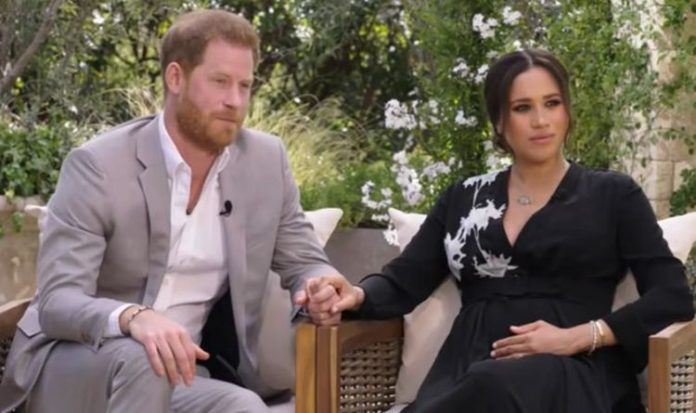 The monarchy has missed out on a “huge opportunity” to “change [their] face” with Meghan Markle and Prince Harry, a royal commentator has claimed. Daily Mirror Royal Editor Russell Myers spoke to ITV’s Lorraine about the impact of the Duke and Duchess of Sussex’s exit. This comes as the couple’s sit down interview with American chat show legend Oprah Winfrey is due to be broadcast at the end of the week.

Mr Myers agreed: “It’s a shame that we had a huge opportunity with these two.

“They had an opportunity to change the face of the monarchy.

“I think everybody has lost out, unfortunately.”

The royal commentator also issued a warning to the Sussexes about their interview.

The Royal Editor claimed that Harry and Meghan’s was a “disaster waiting to happen”.

The special was billed as 90 minutes but has now been expanded to two hours.

It will be broadcast on March 7 at 8pm EST.

A trailer for the interview has already been released, teasing some highlights.

In the promo clip, Harry says: “I’m just really relieved and happy to be sitting here, talking to you, with my wife by my side.

“I can’t begin to imagine what it must have been like for her, going through this process by herself, all those years ago because it has been unbelievably tough for the two of us, but at least we had each other.”