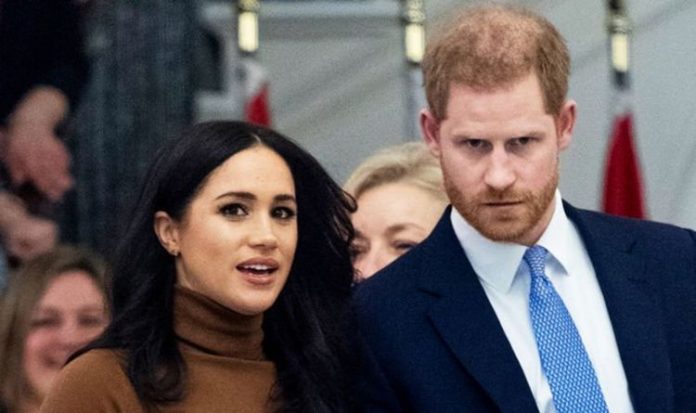 Meghan and Harry have signed a historic deal with the streaming service Netflix, which is thought to be worth £112million. The deal has enabled the Sussexes to pay back the taxpayer after using £2.4million from the public purse to renovate Frogmore Cottage, their home in Windsor. They have also purchased their first home together in the secluded city of Santa Barbara, California, which is thought to be worth £11million, for which they took out a £7million mortgage.

The couple are reported to have discontinued the hefty allowance from Prince Charles, too, which came from his private estate, the Duchy of Cornwall.

The Sussexes now appeared to have achieved their goal of financial independence from the Royal Family — but they may soon hit some stumbling blocks due to their Netflix deal.

Tax adviser David Lesperance told Express.co.uk: “I suspect they have got a very good deal, they appear to have got a greater sum of money than the Obamas.”

Former President Barack Obama and First Lady Michelle signed a Netflix deal in 2018, estimated to be worth $65million (£50million).

Meghan and Harry have just signed a lucrative deal with Netlfix (Image: Getty)

However, Mr Lesperance pointed out: “Depending on how the deal is set up, somebody will pay expenses, either Netflix or the production company.

He said there will be extensive travel and insurance costs involved too, particularly if Harry wants to do environmentally-focused documentaries.

The adviser continued: “Without seeing the deal, are those expenses to be borne by the Sussexes’ production company or Netflix?

READ MORE: How Invictus Games was expected to suffer after Harry’s royal exit

The Duke and Duchess of Sussex will be making documentaries about causes close to their hearts such as the environment (Image: Getty)

“If it is to be borne by the Sussexes, that will lean in significantly into what’s going to be left over after expenses, after corporate tax, after an individual tax.”

The tax adviser also said the couples’ finances could be affected by where the production company is located, as the US would impose federal taxes on such an organisation.

The Sussexes’ production company is yet to be publicly named but they will use it to create documentaries on causes close to both of their hearts, such as the environment and women’s rights.

In a statement, Meghan and Harry said: “Our focus will be on creating content that informs but also gives hope.

Meghan and Harry have also paid of their renovation costs for Frogmore Cottage (Image: Getty)

The Sussexes were keen to become financially independent of the Royal Family ever since they announced their decision to step back from the Firm (Image: Getty)

Interestingly, the couple may also appear on screen during their documentaries — a detail which has confused some fans, as they supposedly left the royal frontline in search of newfound privacy and life away from the spotlight.

They have already started an animated series which is focused on inspiring women, while Harry featured in a documentary called ‘Rising Phoenix’ released last week, about the Paralympic Games.

The Sussexes are following in the footsteps of the Obamas, who also signed Netflix deal (Image: Getty)

Mr Lesperance also said that despite Meghan and Harry not being established directors or producers, their global status means Netflix will be able to appeal “to just about anyone” in the film industry.

He added: “So I think it was well worth it from Netflix’s point of view.”

It is unclear how much the Duke and Duchess of Sussex will be paid personally, especially as they have little producing experience.