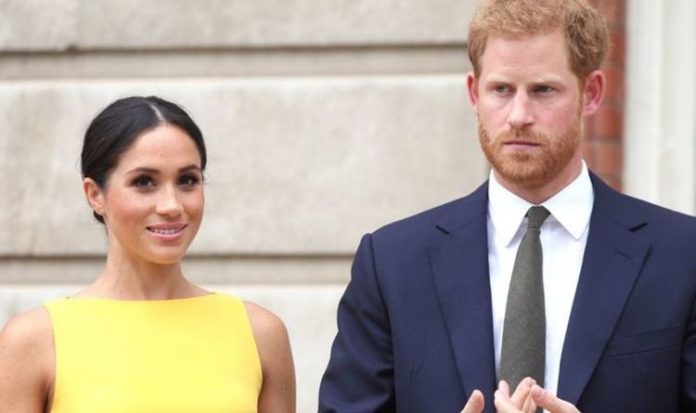 The Duke and Duchess of Sussex sparked more controversy after a leaked memo indicated they had broken royal protocol by meeting with a top Democrat in the run-up to the US election.

The document indicates the couple was booked for a one-hour-long “introductory meeting” with California’s Governor Gavin Newsom on October 19 – just a few weeks before the US election in November. Mr Newsom’s office did not disclose what was discussed during the chat.

The couple were accused of stepping over the line of political neutrality last September when they released a video for the ABC’s Time 100 special urging people to vote in the US elections.

And revelations of their video call with Mr Newsom have sparked fresh calls for the Queen to remove their titles.

Just three per cent (246 people) thought the pair should be allowed to keep their titles despite their latest move into the political arena.

One reader said: “The toxic two are not needed or wanted. The Queen should use her executive powers and be done with them.”

Another said: “Why do they still have them, they should of lost them long ago.

“They are nothing but an embarrassment to the Royal Family and a disgrace to the UK.”

And another said: “Of course Harry and his wife should be stripped of their titles.

“Time and time again, they have been lying with eyes wide open.

“Harry wants to keep his military titles and said he would return to UK more often. Can anyone trust him?

“They know they should not touch American politics yet they don’t care.”

Some readers believed the Queen had been badly let down by Harry and Meghan’s conduct over the last 12 months.

One said: “The Queen certainly deserves much, much better, considering her selfless devotion to Britain and her people for so long.

“Her unappreciative grandson and his arrogant wife deserve to ‘thrive’ on their own as they wish.

“My heart goes out to the Queen in recognition of all she has accomplished with such steadfast devotion.”