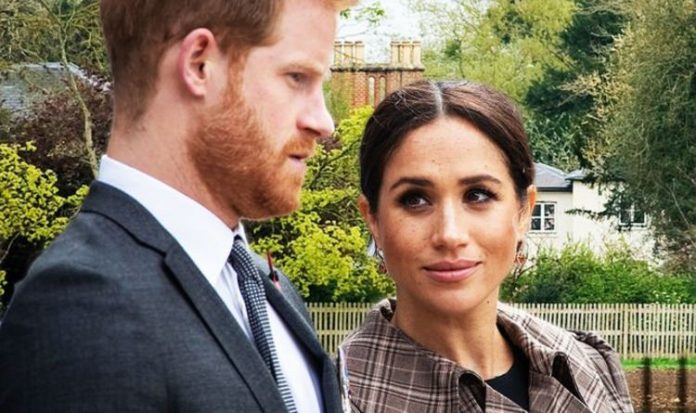 The Duke and Duchess of Sussex have opted for a giant house, complete with nine bedrooms, 16 bathrooms, a swimming pool, games room, gym, spa, tennis court, library, cinema, tea house and a two-bed guesthouse. The mortgage payments are believed to be around £45,000 ($50,000) per month. However, the couple still haven’t paid back the £2.4million they took off the taxpayer for the renovations of Frogmore Cottage, their home in Windsor, when they were still working members of the Royal Family.

The money came out of the Sovereign Grant as a wedding present to the couple from the Queen.

It was this sum that became one of the most hotly contested debates after Meghan and Harry stepped down as senior royals at the end of March, with many insisting the money should now be paid back.

Indeed, the couple did not live at Frogmore as working royals for very long; they moved in shortly before the birth of their son Archie in April 2019 and moved out at the beginning of this year.

The Duke and Duchess of Sussex have held onto Frogmore as their UK base, but are believed to now be paying the market rent for the property, around £30,000 per month upkeep.

Meghan and Harry still have to pay back the money for the Frogmore House renovations (Image: GETTY)

A view of Santa Barbara, where the couple are now living (Image: GETTY)

However, there has been very little transparency in terms of how the Frogmore repayments will work ‒ in other words, how much and when ‒ given that it was a key part of their exit deal.

It has been reported that they have monthly payments of around £18,000 which, if true, would take them up to a decade to pay all the money back.

This may not sit well with taxpayers, who coughed up the money in the first place, when seeing the lavish lifestyle the couple are now enjoying.

Frogmore Cottage was a wedding present for Meghan and Harry from the Queen (Image: GETTY)

Mr Myers pointed out how the Frogmore repayments are still “shrouded in secrecy”, adding that this is an issue that people have the right to be questioning.

Discussing the Montecito mansion, he said: “Now, again, this is their money, they’re fabulously wealthy, why should we be bothered?

“Well the reason people are bothered here is because they still haven’t paid back the £2.4milion that they took off the taxpayer to renovate Frogmore Cottage.

“And part of the exit bill was that they’d agreed to give it back and we still don’t know, it’s still shrouded in secrecy, about whether they’ve made arrangements to pay that money back, what sort of a deal they are paying.

Meghan and Harry at their last royal engagement before they stepped down (Image: GETTY)

“It was rumoured to be around £30,000 upkeep for Frogmore Cottage, that they had agreed to pay market rent on the property.”

He added that their new home in Santa Barbara “probably opened up more questions that it has settled” at the moment.

It was reported in May that the Duke and Duchess of Sussex had started making repayments on their debt on Frogmore Cottage.

It was also claimed they were only able to do so after Harry’s father Prince Charles agreed to foot their security costs abroad, after the Canadian, American and British governments all refused to do so.

This was another hot Megxit issue, with many people believing the couple should stump up the money themselves, and it is understood that Charles will stop bankrolling them after a year.

However, the cost of security could be in the millions each year, so the couple will have to earn vast sums to be able to cover that on top of mortgage payments, Frogmore Cottage repayments and their exclusive lifestyle.

Many people saw this as a defence of their spending on Frogmore Cottage.

Mr Myers said the figure of £1billion was “frankly ludicrous”, adding: “It’s a power play ‒ it’s ‘I’m the big superstar, I was not only benefiting the Royal Family by being here but I’m also benefiting the British taxpayer to the tune of £1billion.’

“And that’s obviously because of the level of criticism that was levelled at them to do with Frogmore Cottage and the wedding and the security detail.”