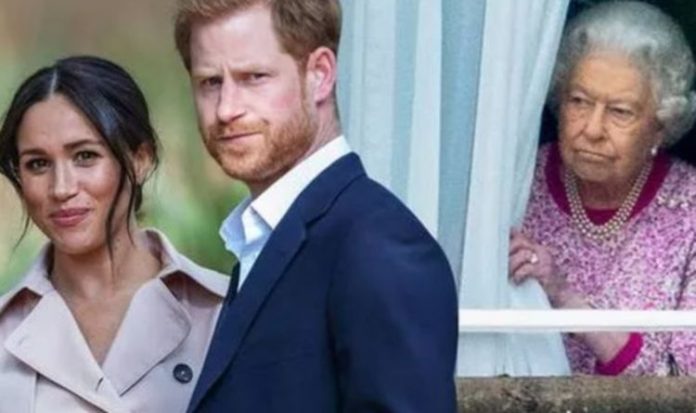 Meghan Markle and Prince Harry confirmed this week they will not be resuming their role as working royals after a one-year trial as private citizens in the United States. The Duke and Duchess of Sussex have been informed their decision will result in the removal of all their royal patronages and appointments to secure a clean break up with the Royal Family. Royal commentator Dickie Arbiter claimed Meghan and Harry had already signalled they would not come back as he suggested speaking to Oprah Winfrey was the “final straw” for the Queen.

Speaking to 9News Australia, Mr Arbiter said: “I think the writing was on the wall.

“It probably is a bit concerning, not just for the Queen but Buckingham Palace and the monarchy as an institution. What does tell-all mean?”

The Duke and Duchess of Sussex confirmed they had agreed to a 90-minute chat with the American talk show presenter that will be aired in March.

The conversation is expected to focus on the Duchess of Sussex’s experience as a new member of the Royal Family, as a mother and as an entrepreneur.

Prince Harry will also be joining Meghan and Oprah Winfrey to talk about the couple’s charitable work with their new organisation, Archewell.

Meghan and Harry have already been warned the interview may be different from previous experiences they have had while still in the Royal Family.

Royal biographer Penny Junor said: “Oprah is a real pro. She gets very good material, that’s why she’s the top of her field.

Former royal correspondent Jenny Bond told the BBC that the suggestion that the Duke and Duchess of Sussex are going to “reveal all and to delve into the depths of why they left is a bit tacky”.

Jenny Bond said: “We are told it is going to be wide-ranging, that it will touch on why they left and how Meghan found the Royal Family.

But if they are going to reveal all, as has been suggested, and to delve into the depths of why they left, that it is a bit tacky isn’t it?”

She questioned why they have “decided to invade their own privacy by going on Oprah,” adding “Lord only knows”.