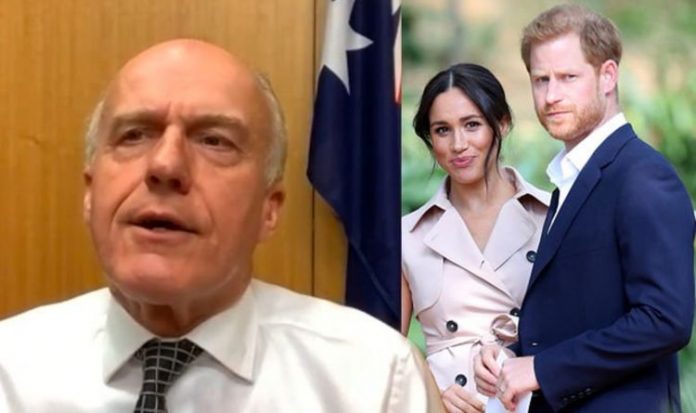 The Duke and Duchess of Sussex have signed a multi-year production deal with Netflix that will have the two royals producing exclusive films and series for the streaming service. This includes scripted series, docu-series, documentaries, features and children’s programming. In January, Harry and Meghan announced that they were “stepping back” from their roles as senior members of the Royal Family, and would split time between the UK and North America.

Since then, the two have purchased a home in California, and dabbled in the entertainment industry.

The Netflix deal appears to be the next step in that evolution.

As the couple set out on a completely new phase of their life, Australian Liberal Senator Eric Abetz revealed what his country’s take on their departure from the Royal Family has been.

He told Express.co.uk: “Look, it would be fair to say… It was a bit of a soap opera.

“I don’t think Meghan and Harry covered themselves in glory, saying they want to divorce themselves from the Royal Family but still want some of the entitlements and benefits that come along.

“They want some of the rights and privileges, but not the responsibilities.

“And that is where I think they let themselves stand very badly.”

Mr Abetz continued: “Having said that, I think the Queen and Buckingham Palace handled it exceptionally well.

Mr Abetz has been a Senator for Tasmania since February 1994, representing the Liberal Party.

He was the Minister for Employment and the Leader of the Government in the Senate in Tony Abbott’s government from 2013 to 2015.

He also previously served as Special Minister of State in the Howard Government from 2001 to 2006 and as Minister for Fisheries, Forestry and Conservation from 2006 to 2007.