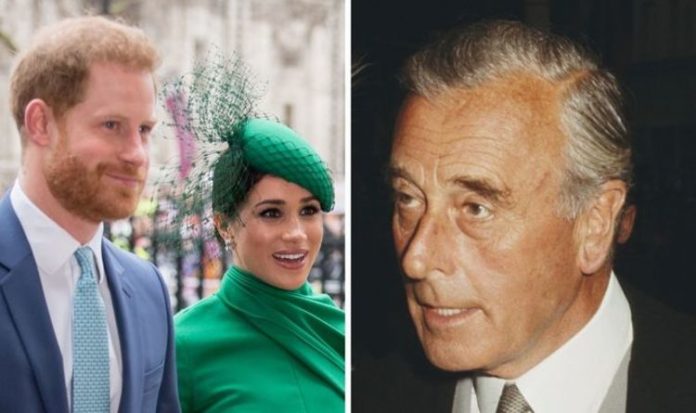 It has been a year since Meghan and Harry left the Royal Family for a private life in what was quickly dubbed ‘Megxit’. While privacy appeared to be the driving factor – the pair had been the focal point of intense public scrutiny for months – others pointed towards their future role in the Firm, or lack thereof. Reports surfaced of the family’s plans to push the pair out of the inner circle as part of a “slimming down” programme.

Whatever the reason, the couple moved to Canada, shortly after travelling south to the US to put down roots in California, where many of Meghan’s friends and family lived.

A number of people at the time drew parallels between Harry’s move and King Edward VIII’s 1936 abdication.

The King decided to leave his post to marry the American socialite divorcée Wallis Simpson.

Harry’s father, Prince Charles, grew up in the shadow of the abdication and saw the effect it had on his mother, the Queen, and grandmother.

Meghan Markle: The Duchess and Prince Harry’s predicament was summed up in an archived letter (Image: GETTY)

South Africa: The pair’s relationship to the Firm began to crumble during their tour of South Africa (Image: GETTY)

Lord Louis Mountbatten, Charles’ “honorary grandfather” and mentor, even berated him about his perceived similarities to Edward VIII when the young Prince of Wales was careless about how his plans would impact household staff – a charge that has also been levelled at Harry and Meghan.

Speaking on podcast Pod Save the Queen ahead of the move, the Daily Mirror’s royal editor Russell Myers explained that concerns at the Palace were beginning to surface surrounding Harry and Meghan’s exit strategy.

He said there were worries it had not been fully planned out, with the couple not having taken royal household staff into consideration.

Mr Myers said: “The Sussexes just didn’t think about anyone but themselves.

“Certainly that is the feeling in some quarters inside the Palace.”

JUST IN: Royal LIVE: Prince Harry ‘spotted’ next to Biden on Inauguration Day

He added that the Sussexes’ plans “[were] described to me as ill-thought-out and haphazard”.

He commented: “That is a pretty damning indictment of the plans that they had. They weren’t thorough at all.”

Lord Mountbatten warned Charles about the dangers of not thinking of others when making big decisions.

He wrote him a letter that might be seen profoundly in line with Meghan and Harry’s departure predicament.

The documentary, ‘The Madness of Prince Charles’, describes the moment Lord Mountbatten went “ballistic” and sent Charles the scathing letter after he failed to think of household staff and created more work for them.

Biographer Philip Ziegler, who featured in the documentary, said: “Mountbatten wrote a very very stern letter to him saying, your behaviour is totally indefensible.

Royal news: The pair haven’t visited the UK in months, mostly due to the coronavirus pandemic (Image: BBC)

Edward VIII was known in the Royal Family as David.

The historian said that the letter read: “I see all the same irresponsibility and frivolity coming out.

“You must take a pull, you must not become like your great-uncle David – think what happened to him.”

Meghan and Harry were similarly criticised for the way in which the Queen was informed of their decision to leave.

The couple had originally used an Instagram post to announce the news, talking of how they wanted to “carve out a progressive new role within this institution”.

Yet, speaking shortly after Megxit, CNBC co-founder, and media CEO Bridget Baker commented that their actions had not been fair on the rest of the family.

She said: “It could have been handled way better.

“Setting aside the substance of the announcement, the approach was weak and manipulative.

“It smacks of leveraging their [hand emoji] (i.e. clout) unnecessarily.”

Canada: The couple at the Canadian Embassy in London ahead of their departure (Image: GETTY)

She noted that events would have taken a completely different turn if Meghan and Harry had announced the news in the way they did on social media in front of some of the Firm’s most senior members.

She said: “Imagine how different it would have played if Harry had said the exact same things standing with his brother and father and maybe his gran.”

More recently, Meghan and Harry appeared to take a further step to cut ties with family after deleting all their social media profiles.