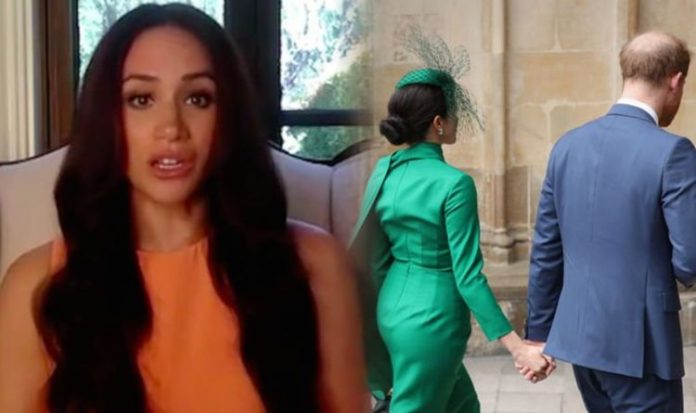 Meghan Markle, 38, said “it’s good to be home” during her latest appearance at a virtual gender and politics summit. The Duchess was among a long list of high-profile speakers ,including Hillary Clinton and Melinda Gates, to take part in The 19th summit which ended on Friday.

Meghan closed the summit by conducting an interview with The 19th’s co-founder and CEO Emily Ramshaw.

While Meghan was the one asking most of the questions she did let slip that it was “good to be home” and pushed by Emily admitted that she planned to be more vocal in future.

As a senior member of the Royal Family Meghan Markle and Harry were expected to remain politically neutral.

However, since stepping down from their roles and relocating to America the couple are now free to align themselves with political causes.

Speaking about her return to the US, Meghan told Emily: “It was so sad to see where our country was in that moment.

“If there’s any silver lining in that, I would say that in the weeks after the murder of George Floyd, in the peaceful protests that you were seeing, in the voices that were coming out, in the way that people were actually owning their role … it shifted from sadness to a feeling of absolute inspiration, because I can see that the tide is turning.”

Meghan said she looked forward to being able to use her voice again in a way she hadn’t been able to as a senior royal.

She said: “From my standpoint, it’s not new to see this undercurrent of racism and certainly unconscious bias, but I think to see the changes that are being made right now is really — it’s something I look forward to being a part of.

She added: “And being part of using my voice in a way that I haven’t been able to of late. So, yeah, it’s good to be home.”