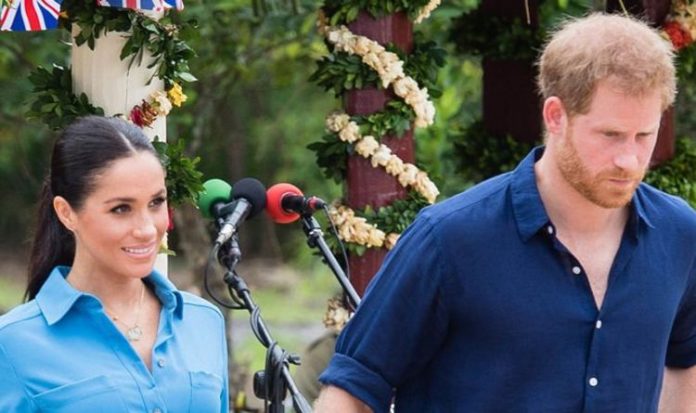 Meghan and Prince Harry’s life together has been analysed by a royal fan who accused the couple of not living by their words. Drawing examples from media reports, the newly-released biography of the Duke and Duchess of Sussex Finding Freedom and Meghan and Harry’s own statements, the royal fan compiled a list of behaviours they believe are not in line with what the couple have sworn by.

“They are happy to organise pap shots, but they hate the paparazzi hounding them.

“They want privacy to live private lives, but they constantly release PR articles and worked on the most detail-heavy novel about their lives, Finding Freedom, and started to plan Megxit when the Firm refused to allow even more journalists and publications have access to them.

Meghan Markle and Prince Harry’s lives are ‘full of contradictions’ according to a royal fan (Image: GETTY)

“They want everyone to live and travel sustainably, but they defend the use of private planes for themselves and chose to live in massive homes that eat energy and water.

“They want to step away so they can escape the British press, but they move to a part of America that’s filled to the brim with celebrities that attract the most press and paparazzi.”

After including other examples, the Tumblr user ended the attack mentioning Meghan’s recent appearance at the virtual engagement organised by a group urging people to register to vote, When We All Vote, where she was introduced as Meghan, The Duchess of Sussex.

They wrote: “I could go on and on, but most importantly, they don’t need or want the monarchy, but they constantly use their titles everywhere they go to remind everyone about how linked they are to the monarchy.”

The accusation Meghan and Harry have organised paparazzi shots comes after the couple were photographed taking part in a charity event in southern Los Angeles last Wednesday.

During the event, organised by Baby2Baby, the Sussexes spoke to families in need and distributed necessities including nappies and toys.

But some royal fans were left baffled after it emerged the Duke and Duchess had brought along with them a photographer to take snaps of their charitable initiative.

Meghan Markle was introduced to the event When All Women Vote as Meghan, The Duchess of Sussex (Image: WHEN ALL WOMEN VOTE)

Prince Harry was asked about his use of private jets during the launch of Travalyst (Image: GETTY)

Members of the media were also briefed on the event and given details on the brand of the face covering chosen by Meghan.

In regards to allegations on Meghan and Harry’s green life, the Duke and Duchess of Sussex had already been attacked over the summer of 2019 for their use of private jets after having appealed to their audience to cut their carbon emissions.

Meghan and Harry were caught taking four private jets in 11 days to fly first to Spain and then to Nice for private holidays.

When asked about these trips in September last year, Prince Harry said he mostly takes commercial planes but, when he needs to protect his family, he chooses to use private aircraft and then offset his carbon emissions.

Royal commentators, in line with what reported by this Tumblr user, have already pointed out over the past few months how moving to California would not protect the couple from the paparazzi they avoided in the UK.

Meghan and Harry have established their new lives in Montecito, an exclusive area of Santa Barbara.

The couple bought a £11.1 mansion spreading across a 7.4-acre compound and including nine bedrooms and 16 bathrooms.

In their attack, this social media user also claimed Meghan and Harry have directly collaborated with the authors of Finding Freedom – however both Omid Scobie and Carolyn Durand as well as a spokesman for the Sussexes had denied any involvement of the royal couple with the book.

Other royal fans welcomed the analysis made in this post, with one Twitter user, Suzanne CairnsEdgson, saying: “Good analysis, so very true.

“They both have immature and unrealistic expectations of their place in the world.

“They think they are knowledgeable and thus influential without foundation.

“It reminds me of ‘old Hollywood’ when studios built a false public persona around their stars to protect their secrets and to portray them in the best possible light – all to increase their fan base & revenue.”

And Hilary Briscoe added: “Sums it all up perfectly”.