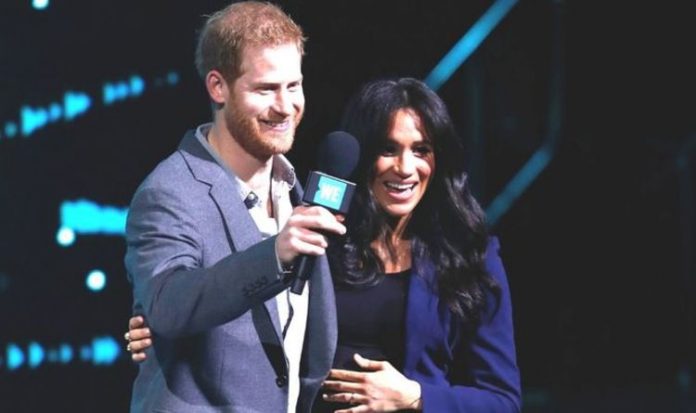 While Harry himself is not beyond redemption, according to Robert Oulds and Niall McCrae, they accuse his wife of initiating a campaign to reshape the Royal Family in accordance with her own “woke” system of values – and of “looking down” on the likes of the Queen, Prince William and Kate, the Duchess of Cambridge. Mr Oulds, director of the Bruges Group, and Mr McCrae, a senior lecturer in mental health at Kings College London, have outlined their ideas in a new book published last week, ‘Moralitis: A Cultural Virus’.

In it, they identify “moralitis” as “a contagion spread by memes rather than microbes” whereby “woke ideology mutates and becomes more extreme”.

Mr Oulds told Express.co.uk: “Meghan has turned Harry from a soldier serving his country into a woke warrior.

“The Royal Family and the Monarchy is a key British institution, a crucial part of both our unwritten constitution and our national identity.

“The Monarchy is highly respected in Britain, the Commonwealth, and the world over.

“For that reason, the woke brigade want to smash all that is great about it.

“The aim is to have a year zero in British life and sweep away our loyalty to our country, Queen, and flag.

“It is no surprise that in the Meghan versus the Queen debate, Republicans side with the one that thinks she knows best.”

Prior to meeting Meghan, Harry was a popular young Royal with an infectious personality and sense of humour, Mr Ould said.

He added: “You might think that Harry must pine for his previous life: the charity work for disabled soldiers, a brilliant tour of the West Indies, his pranks with brother William.

Prince Harry delivers a speech at the opening ceremony of the Invictus Games in Australia in 2018 (Image: GETTY)

“A prince who acted like one of the lads. But perhaps his mind has been too addled with woke subversion.”

Meghan’s impact has been clear, not least in a speech which her husband delivered during WE Day UK last year.

In reference to Meghan’s attitude toward the Royals prior to the couple’s controversial decision to step down as senior members of the family and relocate to the United States earlier this year, Mr Oulds said: “She probably looked down on other Royals because they did not spout the politically correct dogma that Hollywood wannabees parrot.

“She married into the Royal Family and immediately began to undermine this bastion of British heritage.

“The House of Windsor would need a complete overhaul to accommodate Meghan’s superior outlook on the world.”

As for Harry, Mr Oulds added: “All is not lost.

He should read Moralitis: a Cultural Virus.”