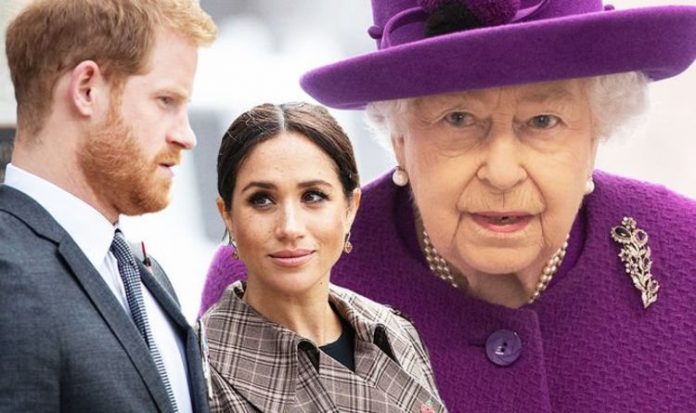 Meghan Markle, 39, and Prince Harry, 36, plunged the monarchy into crisis by announcing their intention to quit as senior royals in January 2020. Since then the Sussexes have relocated to California and will be based in the USA longterm. Shortly after their bombshell announcement, it was agreed with the Queen they could keep the royal patronages pending a one-year review.

After mounting speculation Meghan and Harry could lose the honorary roles, the Palace confirmed on Friday that they would indeed have to relinquish their spots as patrons of several UK charities and organisations.

And that Prince Harry would also have to give up his honorary military titles for good.

A Buckingham Palace statement confirmed: “The Duke and Duchess of Sussex have confirmed to Her Majesty The Queen that they will not be returning as working members of The Royal Family.

“Following conversations with The Duke, The Queen has written confirming that in stepping away from the work of The Royal Family it is not possible to continue with the responsibilities and duties that come with a life of public service.”

READ MORE: Meghan and Harry: Will the Sussexes ever return to the UK?

Prince Harry is still sixth in line to the throne and Mr MacMarthanne described Megxit as a “brutal” move that in some ways echoed Edward VII’s abdication in 1936.

He said: “The withdrawal of the sixth in line, in brutal, monarchical terms, is an irrelevance when compared to say the abdication of a King-Emperor in 1936; or the separation and subsequent divorce of the heir to the throne as in 1992.”

He explained: “If the institution of the monarchy could survive those, it will certainly survive the departure of the Sussexes irrespective of how refreshing and charismatic they might have been.

“That the monarchy is in fact less about the person and all about the institution is evidenced in the consequences of the Duke and Duchess’s departure.”

Mr MacMarthanne issued a reminder that working royals are all ultimately working on behalf of the Queen and so without her backing their work is meaningless.

He said: “Irrespective of whatever talents individual members of the Royal Family possess, if, working royals, they work on behalf of the Queen.

“Patronages and honorary positions flow to them through the Queen, and when given up, for whatever reason, they revert back to the Queen.”

Mr MacMarthanne claimed the removal of Meghan and Harry’s royal patronages “should come as no surprise” when one considers how the monarchy operates.

He concluded: “In understanding this, it should come as no surprise that there was no other option other than for patronages and honorary military positions held by the Sussexes to be returned.

“It’s simply the rules of the game. Thus, whilst the dressings of this present situation might be new, the principles behind it are not.”

A Sussex spokesman said: “As evidenced by their work over the past year, the Duke and Duchess of Sussex remain committed to their duty and service to the UK and around the world, and have offered their continued support to the organisations they have represented regardless of official role.”