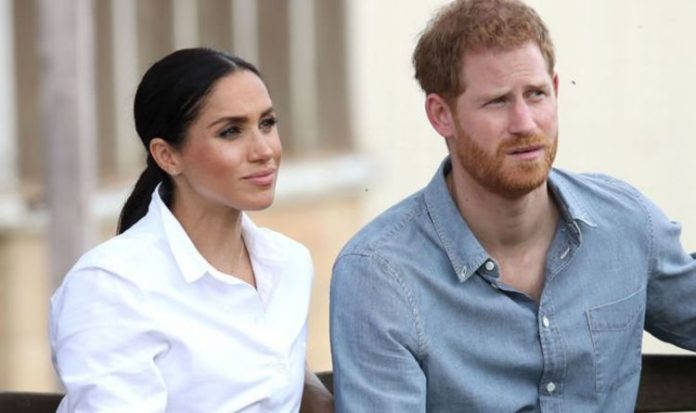 Earlier this year, the couple shocked the world by announcing they were stepping away from the Royal Family. The couple now lives in Los Angeles with their son, Archie.

But their departure rocked the Royal Family earlier this year.

And now even their shortbread treats are being flogged at a bargain price.

The shortbread treats, which marked a trip by Prince Harry and Meghan to Royal Ascot, were produced by Scottish firm Walker’s – but are being sold for just £3.99 despite originally going on sale for £16 at Harrods and Selfridges.

The 250g tin of shortbread, which pictures Meghan and Harry on the front, is believed to go out of date in February.

Tins of teabags marking their 2018 wedding are also available for just £4.

A TK Maxx shopper in Halifax, West Yorks, said: “The public’s changing opinion can never be more sharply highlighted than Harry and Meghan’s Harrods’ shortbread being flogged in TK Maxx.

Following their departure from the Firm, the CEO of Republic – an organisation campaigning for the monarch to be replaced by an elected head of state – warned the next generation of royals will see “sharp decline” in support.

“The Queen’s children and grandchildren are simply not in the same bracket as the Queen in terms of levels of support.”

He added: “Andrew’s demise and Prince Harry’s departure coming right on the back of each other put the monarchy in a difficult position.

“It leaves only William and Charles at the forefront, but they are not particularly interesting or inspiring, there is really no one else.”

However, the Queen is reportedly creating a “New Firm” of eight senior members of the Royal Family who will attend events and represent the crown.

The line-up was unveiled on Tuesday, when the Queen hosted the first public royal gathering in nine months at Windsor Castle.

It includes Prince William and Kate, Duchess of Cambridge, Prince Charles and Camilla, Duchess of Cornwall, Prince Edward and Sophie, Countess of Wessex and Princess Anne.

A royal source told the Daily Mirror: “The family are united in exploring the possibilities in working with each other to highlight the causes dear to their hearts, helping each other and the country at the same time.