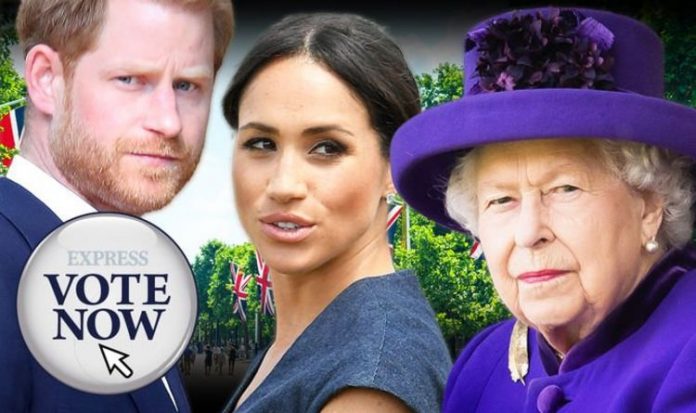 The Queen earlier this year reluctantly agreed to her grandson Prince Harry and his wife Meghan’s wish for a more independent future after crisis talks to resolve a widening rift among the Windsors resulted in the couple’s bombshell departure from the Firm. The royal crisis was triggered when Harry, 35, and Meghan, 38, publicly announced in January they wished to step back from royal duties and spend more time in the US.

Harry and Meghan shocked Queen Elizabeth II and the other Windsors in January when they announced their plans step away from the public spotlight.

A later deal brokered by the 94-year-old monarch meant they went on their own way from April.

During showdown talks, dubbed the ‘Sandringham Summit’, with the Queen, her heir Charles and Prince William, Harry and Meghan agreed to abide by a number of rules to embark on their new life, which are set to reviewed in the new year.

The Megxit review is set to take place in the new year (Image: GETTY )

With the review fast approaching, it is unclear how the couple will proceed and whether or not they will ask the Queen to rejoin the Royal Family.

As part of the January agreement, the Duke and Duchess of Sussex sought to carve out “a progressive new role”, with the aim to finance themselves.

The pair also stopped using their HRH titles – His or Her Royal Highness – were banned from using “royal” in their branding and Harry, who remains a prince, was forced to relinquish his beloved military titles.

Harry, 35, and Meghan, 38, publicly announced in January that they wished to step back from royal duties (Image: PA)

As a result, the couple no longer use their Sussex Royal handle on Instagram nor update their SussexRoyal.com website.

The Sussex Royal Foundation, which they were setting up, was also wound up.

Harry, and Meghan, a former US actress, married in a lavish Windsor ceremony in May 2018, a wedding which was heralded at the time as infusing a blast of Hollywood glamour and modernity into the monarchy, and making them one of the world’s biggest celebrity couples.

The Queen earlier this year reluctantly agreed to her grandson Prince Harry and his wife Meghan’s wish for a more independent future (Image: SPLASH )

Their firstborn son Archie Harrison was born a year later, but by then relations with the media and with Harry’s elder brother Prince William were becoming strained, and in January they announced plans to step back from their royal roles.

The announcement provoked a crisis, and in a subsequent deal thrashed out with the queen, her son and heir Prince Charles and William, it was agreed the couple would have to give up their royal jobs altogether.

But since their departure, the couple have signed a major TV deal with US streaming giant Netflix as they carve out their new life in Los Angeles.

Meghan and Harry also sparked speculation they had no plans to return to the UK when it emerged they had reportedly handed the keys of their Windsor Frogmore Cottage over to Princess Eugenie and Jack Brooksbank, who are expecting their first child.

The news also fuelled speculation the pair would not return to the UK for next year’s Megxit review with the Queen.

Twitter users predicted the couple could snub their one-year Megxit review, which is due to take place 12 months after the couple officially stepped down as senior royals.

The Duke and Duchess of Sussex sought to carve out “a progressive new role”, with the aim to finance themselves (Image: PA)

One fan, whose bio states they are a “hardcore, unapologetic fan and defender of Meghan Duchess of Sussex”, wrote: “Why am I so damn happy that Harry and Meghan are letting Eugenie and her husband stay at Frogmore?

“It means, what we been knew, they ain’t going back. And they are saying f**k that one year review!”

Another said:“I hope they’ll be doing that review by themselves in that family because Harry and Meghan won’t be showing up. #bookedandbusy.”