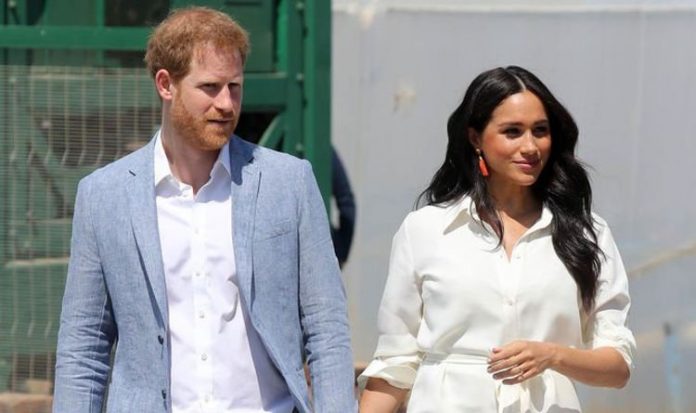 Prince Harry said it “doesn’t matter where in the world we have been” when it comes to supporting their charitable causes, as he and Meghan have done everything they could to stay as close as possible to their associations. The Duke and Duchess of Sussex were asked whether they have found it difficult to help their patronages in the UK while stuck in the US because of the coronavirus pandemic.

“Actually it doesn’t matter where in the world we have been, we have stayed in touch with and supported the organisations as much as humanly possible.”

Similarly, Meghan said everyone across the world had to adapt to the challenges presented by the pandemic and the impossibility to meet each other even if they were neighbours.

She explained: “Everyone has been accustomed to what it means to be distanced.

Meghan Markle and Prince Harry have remained in touch with their patronages after moving to the US (Image: GETTY)

“The impact of that, whether it is across the pond or across town, you are still for the most part through a computer screen.

“We have all had to adapt to how we can have the most impact as possible within the constraints of what has happening with COVID-19.

“Like all of you, we are doing the best that we can and hoping that our passion and our commitment is still felt as it certainly hasn’t wavered.”

READ MORE: Meghan and Harry asked Queen to ‘move in with her’

Meghan Markle and Prince Harry speaking about the upcoming US election (Image: TIME)

The Duke and Duchess of Sussex moved to California in late March, when the US state was one of the areas hit the hardest by coronavirus.

They have since bought their first home together in Montecito, Santa Barbara, and are working behind the scenes to the launch of their foundation, Archewell.

At the height of the lockdown in the UK, the couple continued to reach out to their patronages.

In March, Meghan spoke to a young client of Smart Works, one of her four patronages, via video chat.

Meghan Markle and Prince Harry during their tour to South Africa (Image: GETTY)

The couple also crashed the staff meeting of a branch of Crisis to renew their interest in mental health and providing support to those struggling.

Meghan and Harry contributed to launching Black History Month in the UK today by sharing their BHM NextGen Trailblazers list.

This list includes people they deemed inspirational and selected from a number of nominations submitted by high-profile BAME (Black, Asian and Minority Ethnic) figures.

During Black History Month, which in the US is marked in February, the society celebrates through cultural events and initiatives the contribution made by the black community.

Meghan and Harry also issued a call for action to end systematic racism in the UK.

Demanding a more equal and just society, they wrote in the Standard: “For as long as structural racism exists, there will be generations of young people of colour who do not start their lives with the same equality of opportunity as their white peers.

“And for as long as that continues, the untapped potential will never get to be realised.”

Meghan Markle and Prince Harry married in May 2018 (Image: GETTY)

The couple made a similar plea in June, during a call with members of the Queen’s Commonwealth Trust and young leaders.

As President and Vice President of the Trust, Harry and Meghan said it was time to hold an “uncomfortable” conversation focused on the history of the Commonwealth to “right those wrongs” of the past.

The Duchess said: “We’re going to have to be a little uncomfortable right now, because it’s only in pushing through that discomfort that we get to the other side of this and find the place where a high tide raises all ships.