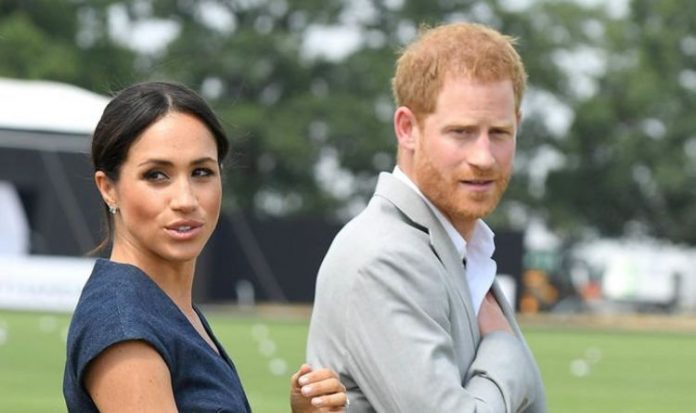 Meghan and Prince Harry could be paid several hundreds of thousands of pounds for a speaking engagement now that they are no longer tied to the Royal Family as full-time working members. But their stellar worth sits with their links to royalty, according to Brand and reputation management expert Eric Schiffer.

Mr Schiffer warned there would have been “zero interest” in Harry Wales and Meghan Markle from organisations interested in hiring paid speakers at their events.

He told Express.co.uk: “If neither of them had royalty ties there would be zero interest.

“And they get a premium because they have now created a tie with Hollywood.

“As a couple, I think we could see a low-to-medium level six figures for speaking engagements.”

However, the chairman of Reputation Management Consultants added this eye-watering figure applies only to the Duke and Duchess as a couple.

He continued: “Their value is collective.

“The power is in the couple, is not in the individuals.

“In either of the individuals [as paid speakers] the value is decimated.

“But Harry would always have more value because of where he comes from.

“Meghan’s value is amplified significantly because of the royal heritage.”

It is not known whether Meghan and Harry have taken part in any paid speaking engagement yet, after the coronavirus pandemic forced all organisations to cancel their events or move them to online platforms.

Meghan joined the Royal Family on May 19 2018, upon tying the knot with Harry at St George’s Chapel in Windsor.

Less than two years later, the couple had officially relinquished their rights to carry out royal duties and use their Her/His Royal Highness styles in order to conduct a more private life and become financially independent.

The pair have since appeared in a few video calls and messages.

In June, Meghan openly backed the Black Lives Matter movement in an impassioned speech to the graduating class of 2020 at her former high school.

In early July, embracing the demands for racial equality across the western world, the Duke and Duchess spoke via video link with trustees and young leaders at the Queen’s Commonwealth Trust about the need to “right the wrongs” in the history of the Commonwealth.

READ  New footbridge to be provide safe passage over A5

Meghan also took part in several virtual summits to speak about voting rights in the US.

Appearing on the When All Women Vote event organised by a voting group backed by Michelle Obama, the Duchess touched upon voter suppression and the importance of making one’s voice heard.

And in a rallying cry to all women eligible to register to vote in the US election, Meghan spoke of “change”.

She said: “We’re only 75 days away from election day and that is so very close, and yet there’s so much work to be done in that amount of time because we all know what’s at stake this year. I know it.

“I think all of you certainly know it, and if you’re here on this fun event with us, then you’re just as mobilised and energised to see the change that we all need and deserve.”

In September, after they announced they had struck a multi-year deal with Netflix which will see them producing a series of TV shows, documentaries and children’s programming, the pair also released a clip in which they spoke about the upcoming vote.

The couple filmed a video for the ABC’s Time 100 special from the garden at their home in Montecito, Santa Barbara.

In it, Meghan said the upcoming US vote was particularly important, a remark seen as a slight at Mr Trump.

She said: “Every four years, we are told the same thing—that this is the most important election of our lifetime. But this one is.

“When we vote, our values are put into action and our voices are heard.

“Your voice is a reminder that you matter, because you do, and you deserve to be heard.”

Prince Harry, after saying he can’t vote on November 3, added: “As we approach this November, it’s vital that we reject hate speech, misinformation, and online negativity.”