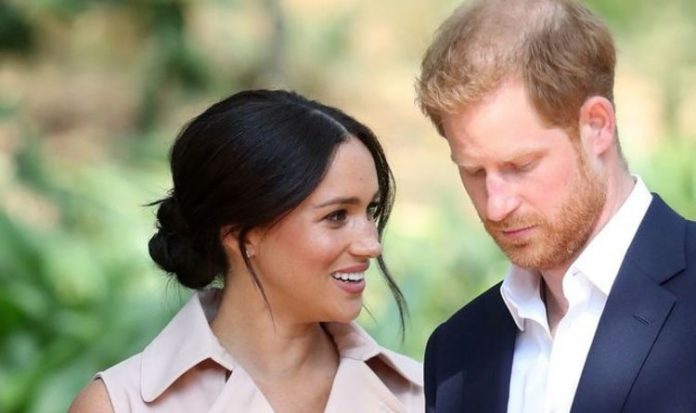 Meghan and Prince Harry officially stepped down as senior royals on March 31, when they gave up their rights to carry out royal duties, use their former brand Sussex Royal as well as their HRH styles. In turn, their decision granted them the freedom to live in North America as well as to become financially independent, two focal points of the bombshell statement they released in January.

In their search for a new role, Meghan and Harry have met “unexpected challenges”, royal expert Omid Scobie said.

He told Vanity Fair: “Every step of the way there have been unexpected challenges.

“They have had to go up against a lot — the press, their legal battles and even the institution of the monarchy — but they’ve remained positive and it’s the support they give each other and their focus on what’s important that gets them through.”

Meghan and Prince Harry completed their last engagements as senior royals in mid-March.

Afterwards, they returned to British Columbia, where their son Archie Harrison had been waiting for them, and travelled across the US border to start their new lives in California.

In July, the couple moved into a home they bought in Montecito, California, making their move across the pond appear more permanent.

Throughout the summer, the couple worked behind the scenes to their yet-to-be-launched foundation, Archewell.

But they also got in touch with local charities and associations focused on issues close to their heart such as racial equality, female empowerment and mental health.

Meghan and Harry, who retained their patronages, continued to be in contact with their beloved charities too, and took part in several calls with trustees and members of the Queen’s Commonwealth Trust to start a conversation on the Commonwealth’s past.

The Duke and Duchess of Sussex also spoke about voter registration, with Harry publicly admitting for the first time he has never voted in his life while Meghan was clearly hinting she would cast a ballot on November 3.

Their remarks on the US election were met with criticism by several commentators, with some calling for the Queen to strip the Sussexes of their titles.

Meghan Markle and Prince Harry have been working behind the scenes on their foundation (Image: GETTY)

At the time, Buckingham Palace responded to Meghan and Harry’s comment distancing itself from the couple.

A brief statement issued after the palace was asked whether the Duke had broke protocol with his voting remarks read: “We would not comment.

“The Duke is not a working member of the Royal Family, and any comments he makes are made in a personal capacity.”

This year, Meghan also successfully won an application to push back from January 2021 to autumn next year the trial for her high profile court case against the publisher of the Mail on Sunday, Associated Newspapers.

Meghan Markle and Prince Harry announced their intention to step back as senior royals In January (Image: EXPRESS)

One of the Sussexes’ personal highs of the year included striking a deal with Netflix.

In September, Meghan and Harry announced they would become TV producers for the streaming platform to crate documentaries, children programming and TV series.

The Sussexes have also been hit by a personal and devastating tragedy over the summer, which they decided to reveal in their own terms in an essay penned by Meghan in November.

During an ordinary morning in July, after changing her son’s nappy, Meghan realised she was having a miscarriage.

She wrote in the New York Times: “After changing his diaper, I felt a sharp cramp.

Prince Harry has been stripped of his honorary military titles after Megxit (Image: GETTY)

Referring to a year that has featured highs and painful experiences for the Sussexes, a friend of the couple told Vanity Fair: “It’s been a big year for sure and one that has been a rollercoaster.

“2020 has seen them leave the royal family, leave Britain and move to LA to their dream home where they are finally able to lay down new roots.”