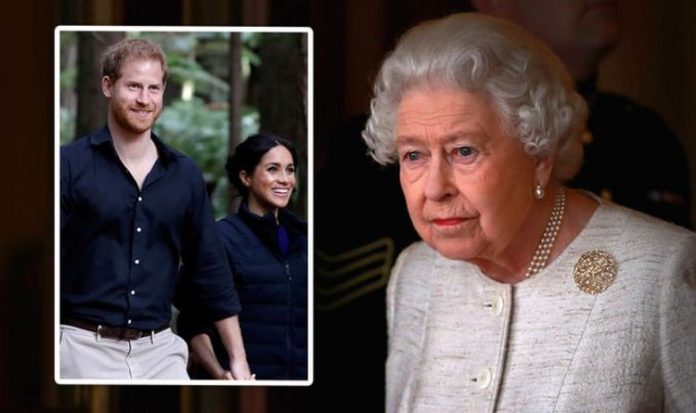 Royal expert Peter Hunt believes there is little courtiers and palace aides could do to sway Meghan and Harry and have them, and their focus, return into the royal fold. The BBC former royal correspondent wrote in The Spectator: “Rattled and riled, royal officials can but watch from the sidelines as the couple continue to explore their new life.

“They have serious money (thanks to their deal with Netflix); a significant platform; and a global audience on first name terms with Harry and Meghan who are intrigued as to what their next move will be.

“Nothing at this stage can be ruled out — even a run for public (presidential?) office by the former actress.

“Such talk is enough to turn the ‘men in grey suits’ puce.

“They can huff, and they can puff, but they’re unlikely to blow Harry and Meghan off course.”

During the past few months in their post-royal lives, Meghan and Prince Harry have achieved financial independence from the Sovereign Grant and Prince Charles and settled down in California with new careers as TV producers.

The Duke and Duchess of Sussex have also made their voices heard on a series of issues commonly avoided by royals, including racial equality and voting rights.

Last week, Meghan and Harry invited Americans to vote in the upcoming US election.

While the Duchess branded the vote to be held on November 3 “the most important election of our lifetime”, Prince Harry invited the US public to steer away from misinformation and online hate.

US President Donald Trump was asked about the Duke and Duchess’ remarks during a press conference – risking the worlds of politics and royal to controversially collide.

He said of the Duchess: “I’m not a fan of hers and I would say this.”

Speaking about the Duke, he added: “I wish a lot of luck to Harry, because he’s going to need it.”

Branded controversial by many commentators and royal watchers, the Sussexes’ remarks have created discontent and worries within the palace’s walls, according to the Sunday Times.

Courtiers recently held talks to discuss whether to further distance the Crown from the Sussexes after they “violated” their pledge to uphold the values of the Queen, the newspaper wrote.

Touching upon the idea of stripping the couple of their titles, one source said: “The view at the moment is that you can’t do that to Harry.

“Even Edward VIII kept his HRH when he abdicated … [but] there is a strong view that the family really does need to put more distance between them and Harry and Meghan.”

Similarly, Mr Hunt believes it would be “churlish” to take away the titles of Duke and Duchess of Sussex from Meghan and Harry.

He wrote: “Any attempt to strip them of their HRHs would be remarkably churlish.

“It was a mistake when they did it to Harry’s mother, Diana.

“Meghan is a princess of the United Kingdom, by marriage.

“Harry is a prince by birth. He’s the son of a future king, the grandson of the present Queen and sixth in line to the throne.

“Even if their dukedom disappeared, they’d be Prince Henry and Princess Henry.”