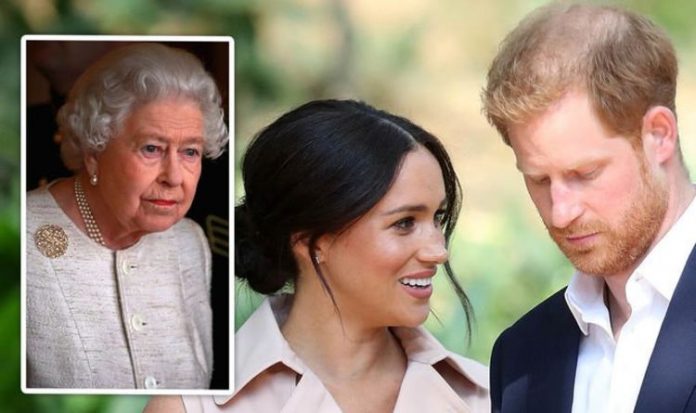 There isn’t “the slightest chance” of Meghan and Harry relinquishing their titles as Duke and Duchess of Sussex despite calls from royal fans and commentators, a royal author said. Nigel Cawthorne, author of Prince Andrew, Epstein, Maxwell and the Palace, noted the titles were given Meghan and Harry by the Queen as a present.

And, as with any other gift, it would be “very ungrateful” if the couple gave them away, the expert added.

He told Express.co.uk: “I don’t think there is the slightest chance that the Sussexes will give up their titles.

“They were a wedding present by the Queen to the married couple and it would be a very ungrateful gesture to relinquish these titles as it would, in effect, be a snub to Harry’s grandmother the Queen.”

Meghan and Harry stepped down as senior royals in late March.

Meghan Markle and Prince Harry are very unlikely to give up their royal titles, an expert said (Image: GETTY)

The Duke and Duchess have since supported their patronages as well as worked behind the scenes on their new foundation, Archewell.

But the couple have also taken steps towards becoming financially independent, which eventually saw them striking a multi-year deal with Netflix.

Moreover, Meghan and Harry have stepped into conversations, such as race equality and voting rights, from which senior royals usually stir away.

Their post-royal interests and work have raised calls among some royal fans and commentators for the Duke and Duchess of Sussex to relinquish their titles.

Meghan joined the When All Women Vote virtual event, a campaign aiming to encourage more women to register to vote at the upcoming US election.

Meghan Markle and Prince Harry were given their titles as a wedding present from the Queen (Image: GETTY)

During her brief speech, Meghan didn’t openly speak or back any of the candidates running for the presidency.

Rather, she urged people to vote on November 3 as “we all know what’s at stake this year”.

She continued: “I think we are obviously faced with a lot of problems in our world right now, both in the physical world and in the digital world, but we can and must do everything we can to ensure all women have their voices heard.

Meghan Markle and Prince Harry married in May 2018 (Image: GETTY)

“If you aren’t going out there and voting, then you’re complicit.”

However, GMB presenter Piers Morgan urged the Queen to strip the Duke and Duchess of Sussex of their titles.

He wrote on Twitter: “The Queen must strip the Sussexes of their titles.

“They can’t remain as royals and spout off about foreign elections in such a brazenly partisan way.”

A recent poll carried out by Express.co.uk also showed a huge chunk of respondents believing Meghan and Harry should no longer carry their titles.

Out of 59,523 people polled, a huge 89 percent of respondents (52,903 people) replied yes to the question “Should Prince Harry and Meghan Markle be stripped of their Sussex royal title”.

However, US royal historian Marlene Koenig believes Meghan’s involvement in campaigns pushing people to vote in November isn’t problematic for the Royal Family.

She told Express.co.uk: “Meghan has been discussing voting and voter registration.

“This is not political, but non-partisan.

Meghan Markle and Prince Harry have relinquished the use of their HRH styles (Image: GETTY)

“She is not saying to vote for a particular candidate.

“Moreover, she is living in the US, as a US citizen, as a non-working royal.

“Her statements or conversations do not clash with the British constitution, the monarchy and the members of the Royal Family refraining from discussing British politics.

“The Queen is not the sovereign of the US.

“Thus, the Duchess of Sussex’s statements have nothing to do with the UK, so she is not violating the role of a royal in the UK.”