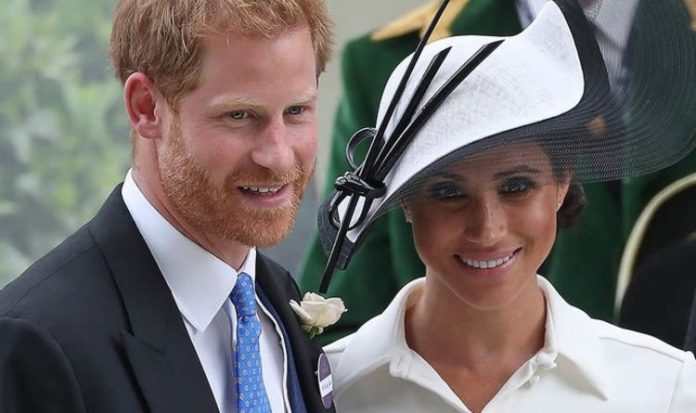 Meghan Markle and Harry: Everyone has ‘lost out’ says expert

One report by money.co.uk, a website comparing business bank accounts, has warned Meghan and Prince Harry’s income could “plummet” following Megxit, as the couple are now independent from the Sovereign Grant. And Salman Haqqi, personal finance expert at the company, has highlighted the pair’s need to seek profitable deals.

He said: “Now the decision not to return to their positions as working members of the Royal Family has been made, the need for a steady income as private individuals will mean it’s down to business for Meghan and Harry.

“Maximising their celebrity to further causes close to their hearts, as well as increasing their commercial earnings to support their growing family, will be a focus for the couple as they continue building their new lives in California.”

The Duke and Duchess have so far shown they are capable of striking profitable deals with companies, having signed two multi-year contracts with streaming giants Netflix and Spotify.

However, the report has outlined there are other ways for the couple to earn thousands of pounds thanks to their global brand and fame.

One of the most profitable ones consists of the use of one social media platform, Instagram, where the Duke and Duchess of Sussex are already popular.

The report reads: “The couple currently has 10.3 million followers on their joint account, @sussexroyal, and if they chose to cooperate in brand deals their earnings could reach in excess of £24,000 per post.

“And although this seems like a lot, if they worked together by creating separate social media accounts, the number of followers they could obtain is likely to be astronomical.

“The increase of followers could easily be turned into a money-making machine.

“At the moment, the posts made on the account are often impersonal and do seem organised by their social media managers.

Meghan Markle and Prince Harry have signed a deal with Spotify (Image: GETTY)

“But if they chose to interact with their followers and increase their personal brands online, the growth could be huge.”

The report uses as an example of how profitable it can be to have millions of followers online beauty entrepreneur and influencer Kylie Jenner.

Ms Jenner, who counts more than 216 million followers on Instagram, is believed to be raking in more than £500,000 per sponsored post.

Meghan and Prince Harry published their last post on sussexroyal on March 30 2020, when they bowed out public duties and their roles as senior royals.

While the account is still active, the Sussexes have shut down the comment section of their sussexroyal Instagram account and haven’t published anything there since, in line with the Queen’s request not to use the word “royal” in their branding after Megxit.

The Duke and Duchess of Sussex have not used any private or public social media account since and haven’t brought their new organisation, Archewell, on Instagram or Twitter to connect with their fans and target audience.

However, Prince Harry hasn’t entirely ruled out he and Meghan may one day return to social media – and if they did, they would likely gain back the 10 million followers they had on sussexroyal.

He told Fast Company in January: “We will revisit social media when it feels right for us — perhaps when we see more meaningful commitments to change or reform — but right now we’ve thrown much of our energy into learning about this space and how we can help.”

Correcting rumours they had “no plans” to use social media for Archewell and that it was “very unlikely” to return to their personal accounts, Harry added: “The truth is, despite its well-documented ills, social media can offer a means of connecting and community, which are vital to us as human beings.

“We need to hear each other’s stories and be able to share our own. That’s part of the beauty of life.

“And don’t get me wrong; I’m not suggesting that a reform of the digital space will create a world that’s all rainbows and sunshine, because that’s not realistic, and that, too, isn’t life.

“There can be disagreement, conversation, opposing points of view — as there should be, but never to the extent that violence is created, truth is mystified, and lives are jeopardised.”

The report also outlined the Duke and Duchess of Sussex could earn thousands through commercial partnerships, book deals and public speaking and personal business ventures.

In mid-December, Meghan confirmed she had invested in a small, woman-owned company called Clevr Blends.

The size of her investment was not disclosed, but it shows the Duchess of Sussex is keen on supporting projects she deems interesting.

Over the past 11 months, Meghan and Harry did not take part in any face-to-face speaking engagement due to the ongoing coronavirus pandemic.

However, in June last year it emerged they signed with speaking agency Henry Walker, which also represents the Obamas and the Clintons.