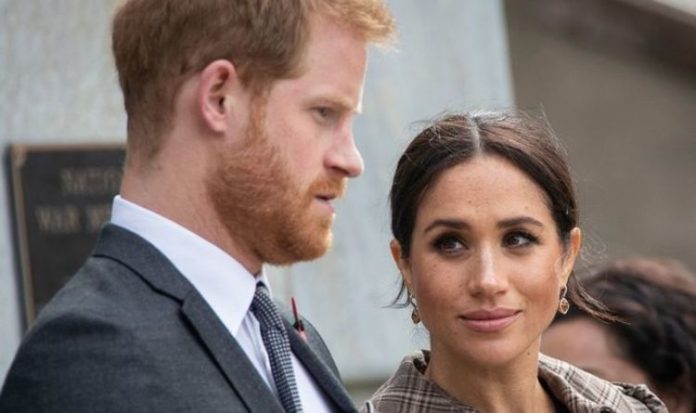 Meghan and Prince Harry struck a deal with Netflix in September, five months after leaving their full-time working roles within the Royal Family. This deal with the streaming platform and the work they are planning to do for it will likely be one of the key topics discussed in March, when the Queen, Prince Charles and Prince William will gather to review the terms of the agreement struck in January with Prince Harry, according to royal expert Richard Fitzwilliams.

He told Express.co.uk: “Harry and Meghan will be keen on launching their non-profit foundation Archewell as soon as the pandemic permits.

“They are now financially independent, as they intended to be and will be involved in planning their deal with Netflix.

“There will be enquiries as to the work they plan to do, especially given the intentionally malign portrait that Netflix’s The Crown has painted of the Royal Family in the fourth season.

“The earlier episodes were very different.

“This could be a problematic area though Harry and Meghan have no links with The Crown, which began in 2016.”

Upon announcing their deal with the streaming platform, Meghan and Harry said they would work on documentaries, docu-series, children programming, feature films and scripted shows, with content that “informs but also gives hope”.

Prince Harry met the three other senior royals at Sandringham a few days after the Duke and Duchess of Sussex published a bombshell statement announcing their intention to step back from their roles.

READ MORE: Prince Harry determined ‘wherever he is’ to continue military work

At the time, Meghan and Harry said they desired to continue to carry out royal duties while also be given the permission to pursue profitable ventures to become financially independent from the Sovereign Grant.

Moreover, they spoke about their intention to live between North America and the UK.

Following the Sandringham summit, Meghan and Harry agreed on no longer use their HRH styles and first brand name Sussex Royal.

Moreover, they convened to no longer undertake royal duties.

Prince Harry was also stripped of his honorary military titles.

However, while he is no longer holding them, the Queen has yet to fill the vacant roles.

This move has been seen by several royal commentators as the Queen’s way to leave the door open to a possible return to the royal fold for the Sussexes by March next year.

Meghan Markle and Prince Harry announced their intention to step back as senior royals in January (Image: EXPRESS)

In turn, Meghan and Harry were allowed to live abroad, work and retain their patronages.

This agreement, it was revealed in February, would be reviewed 12 months after Meghan and Harry officially stepped down as senior royals – in March 2021.

Speaking about the review, a palace source said at the time: “The Royal Family and Sussexes have agreed to an initial 12-month review to ensure the arrangement works for all parties”.

Mr Fitzwilliams believes the review will also touch upon other issues, including Prince Harry’s possible attendance to military events in the future.

The expert said: “Undoubtedly there will be clarification on what participation is considered appropriate for Prince Harry, a former veteran who founded the Invictus Games for wounded service personnel, at next year’s commemoration of Remembrance Day.

“Most importantly for Harry, the decision about his military links, which have been kept vacant, especially that of Captain-General of the Royal Marines, is likely to be made during the reassessment.”

Prince Harry is a veteran who has served in the Army for 10 years and fought in the war in Afghanistan.