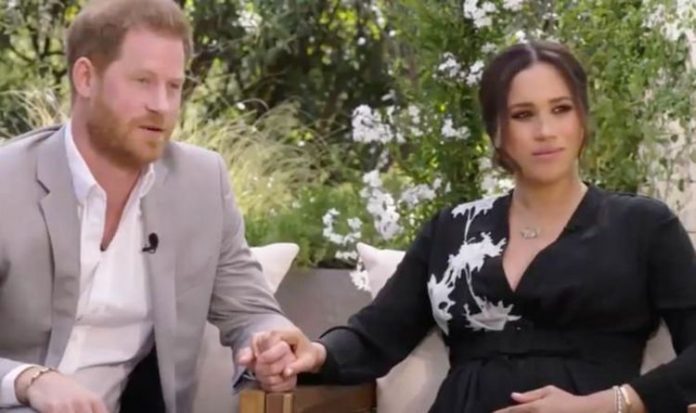 Meghan and Prince Harry’s pre-recorded interview with Oprah is set to air on US broadcaster CBS on March 7 at 8pm ET (March 8 at 1am GMT). However, several royal watchers and commentators have called for this sit-down chat to be postponed while Prince Philip remains in hospital with an infection.

Public relations and crisis consultant Mark Borkowski has branded the timing of the interview “just horrendous” and warned the chat with Oprah could harm all parties involved if it goes ahead as planned at the moment.

He told PA: “The timing is just horrendous.

“Anybody who looks at this through the optics of a caring family, even a family who are estranged from one another, it’s very uncomfortable as you edge towards Sunday.”

The PR expert said going ahead with the interview as planned could clash with Meghan and Harry’s “caring and empathetic” brand.

Mr Borkowski said: “This could be a real reputational mess for everybody involved.

“Harry and Meghan are supposed to be a sensitive, caring and empathetic brand.

“Surely the disruption, particularly to the Queen… but they’re going ahead with this juggernaut.”

Moreover, the expert warned Harry and Meghan’s fate would be “in the lap of the gods” if the Duke of Edinburgh’s health state were to worsen over the next few days, as the interview approaches.

He added: “If you were strategically giving advice about mitigating reputational damage, you would show huge empathy by postponing.”

Prince Philip, who has been in hospital for the last two weeks, was transferred yesterday from King Edward VII Hospital to St Bartholomew’s Hospital, which specialises in heart care.

Only a few hours before Buckingham Palace announced this move, CBS shared two 30-minute clips giving a taste of what viewers can expect from the planned two-hour interview of the Sussexes with Oprah.

In one clip, the journalist asked Meghan whether she was “silent or silenced”, while in another Prince Harry talked about his mother, holding his wife’s hand.

He says: “I’m just really relieved and happy to be sitting here, talking to you, with my wife by my side, because I can’t begin to imagine what it must have been like for her, going through this process by herself, all those years ago.”

After these clips were released and in the midst of concern for the Duke of Edinburgh’s health, several royal commentators commented on the timing of the upcoming interview.

“And what could have been worse than for Prince Harry to be gazing out of television screens all over the world yesterday with another incendiary blast about the misery of his privileged life just as his grandfather Prince Philip was leaving one London hospital by ambulance for another?”

He added: “It’s too late for Harry now, the interview is in the can. But maybe there is still time for some nobility.

“Out of respect to his grandfather, might Harry see if Oprah will reschedule? It surely can’t hurt to ask.”

Royal commentator Richard Fitzwilliams branded the Sussexes’ sit-down with Oprah “an appalling idea” as he claimed it risked jeopardising their future relationship with the Royal Family.

Also noting how the planned interview comes at a difficult time for the Royal Family, he added: “The bulletin today about Prince Philip’s health should mean that, if humanly possible, it should be postponed.

Royal biographer Robert Jobson told the MailOnline: “With the Duke of Edinburgh clearly very unwell, the fact that the couple plan to go ahead with airing their self-indulgent, no holds barred interview with chat show queen Oprah Winfrey makes them appear heartless, thoughtless and supremely selfish.”

Others have noted it is unlikely Meghan and Harry have a say in when the interview should be broadcasted.

Columnist Jan Moir told LBC News: “Could they even delay it if they wanted to? Harry and Meghan, they’ve now done their interview, they’ve sung like canaries in their gilded cage, it’s out of their hands now.

“We are talking about a two-hour long show… around which millions and millions of dollars of advertising may have already been sold.

“Momentum is building, we’re on the runaway train. I’m not sure they could stop it even if they wanted to.”

And Joe Little, managing editor of Majesty magazine, told the Daily Telegraph: “There is unease being expressed about the timing of this interview, which is not particularly helpful, but the ball is out of the Duke and Duchess’s hands.

“This interview has been hyped significantly by CBS and the ball is very much in their court. The transmission date is likely to be set in stone and I can’t imagine it being pulled.”