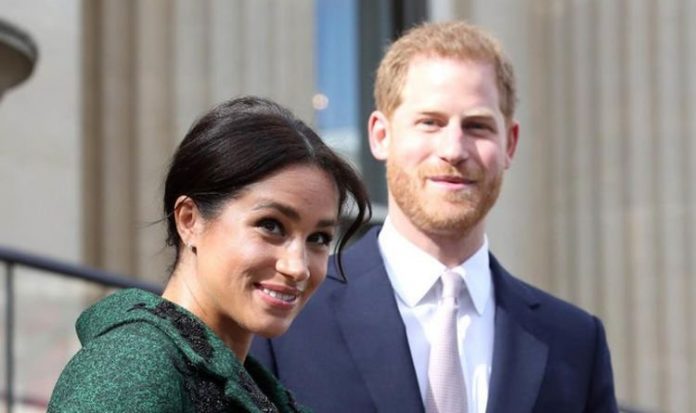 Meghan and Harry have been accused of demanding privacy while being “out there all the time” after a clip featuring the Duchess of Sussex was released yesterday evening. The Duchess was recently filmed in a conversation with activist and feminist Gloria Steinem.

Twitter user Melanie wrote: “Good to see she and Harry are staying out of the spotlight so they can have their privacy.”

Royal fan Anna echoed this thought, saying: “Crying for privacy and yet constantly in the spotlight.

“As a ‘duchess’ she should be worrying about her patronage’s and charities!”

“For someone who wanted to live a private life she sure is out there all the time.”

However, Sussex fans defended Meghan’s right to appear at events, talks and summits while also trying to fend off paparazzi.

Twitter user with the nickname Mtgsowhat said: “H&M want their personal life private for which the public have no right to know.

READ MORE: Queen would stop Meghan Markle from using title if she was not pleased

“Shining a light on causes that are designed to help others is what they do…it’s their calling.

“While we want to…we don’t need to know anything about their private life, just their causes.”

“They will do their work/projects and that will be in the news.

“They don’t want to be stalked in their private life and neither would you.

“I hope this eliminates any confusion you may have.”

Another Sussex fan, Minnie, added: “She NEVER said she was going into hiding.

“They wanted a more peaceful life and it looks like they have it.

“They WILL continue to work.”

Meghan and Prince Harry officially stepped down as senior royals in late March, a few days after having moved from Canada to Los Angeles.

The couple made clear their stance on privacy in October last year, when they announced they were suing the Mail on Sunday’s publisher Associated Newspapers after it printed extracts of a private letter sent by Meghan to her estranged father.

While most royal commentators agree Meghan and Harry have the right to desire privacy, many have argued moving away from the UK and the safety granted by the Royal Family may undermine the Sussexes’ effort.

Royal expert Ingrid Seward told the BBC Radio 4’s Programme in January, after Meghan was photographed by paparazzi on a walk with her dogs and Archie: “Of course the safest place for Harry and Meghan to be is in the UK.

“They haven’t been papped once since their marriage, and if they have been, no pictures have been printed.

“Those rules don’t apply in Canada. The paps can come from all over the world and lie in wait for them.

Similarly, Katie Nicholl told ET after Meghan and Harry’s move to Los Angeles: “One of the key issues for them is that they are in the spotlight.

“They attract a huge amount of attention and their concern has always been how they would balance their private lives with their public roles.

“While they were living in Britain, there were no paparazzi pictures of them.

“There was still a gentleman’s agreement between the press and the palace that when the principals – the senior members of the Royal Family – were enjoying private time, that private time was respected.

“So if the couple were papped, then the British newspapers agreed with the palace that they wouldn’t use those paparazzi pictures.”

In late July, it emerged that Meghan and Harry had filed a lawsuit against paparazzi accused of taking unauthorised images of their one-year-old son Archie in the garden of their home.