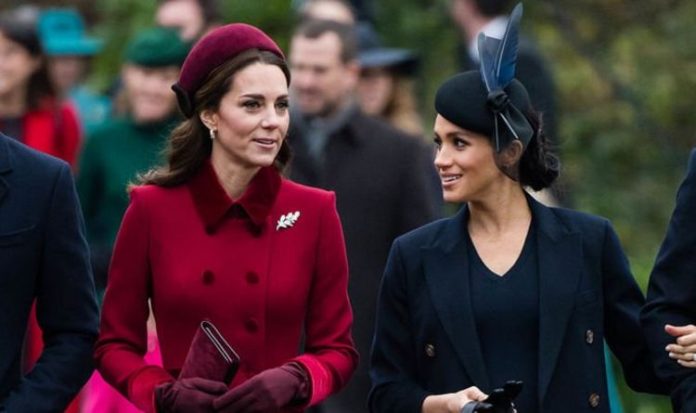 Meghan, Duchess of Sussex, and Kate didn’t cause the fallout between the so-called royal Fab Four, according to royal author Robert Lacey. Rather, the two Duchesses “got on well” and treated each other “with mutual respect”, understanding their roles within the Royal Family and situations as outsiders, according to the biographer.

Mr Lacey wrote in his upcoming book Battle of Brothers: “Meghan and Kate actually got on rather well from the start.

“They might not be best-buddy material, but they found themselves, sister-outsiders in their extraordinary royal situation, and both of them cool professionals, treating each other with mutual respect.

“Each was far too canny to make an enemy of a prospective sister-in-law—it only made sense to be friends.”

Mr Lacey dismisses reports of the ‘Duelling Duchesses’ and the roles they could have played in a feud between the two couples.

Meghan Markle and Kate arriving at church together on Christmas Day 2018 (Image: GETTY)

Prince William and Prince Harry were not on speaking terms in November 2017, an expert has claimed (Image: GETTY)

What eventually broke apart the partnership much-dreamed by royal fans between the Sussexes and the Cambridges was a conflict between William and Harry, the expert added.

He wrote: “The fundamental conflict was between the two males who had known each other all their lives and had never hesitated to tell each other exactly what they thought and felt.”

According to the author, the once close brothers were already no longer on speaking by November 2017, when Meghan and Harry announced their engagement to the world.

Prince Charles, the author added, tried to bring his sons close once again and eventually managed to have both the Sussexes and the Cambridges spend Christmas together at Sandringham.

Meghan Markle and Kate at Wimbledon together (Image: GETTY)

Rumours regarding a fallout between the brothers started to circulate in late 2018, when the Duke and Duchess of Sussex announced their intention to move out of Nottingham Cottage, a three-bedroom apartment on the grounds of Kensington Palace, to live in Windsor.

Their office remained at Kensington Palace, shared with the Cambridges, for a few more months, but in the spring of 2019 Buckingham Palace confirmed Meghan and Harry were given the go-ahead to create their own household and press team.

The separation between the Cambridges and the Sussexes was completed after it was announced Meghan and Harry were leaving the Royal Foundation to launch their own charitable platform, the Sussex Royal Foundation.

Meghan Markle and Kate got along well, an expert said (Image: GETTY)

Meghan Markle and Prince Harry moved out of Kensington Palace in 2019 (Image: GETTY)

From that moment, Kate and Prince William remained alone at the helm of the Royal Foundation, created in 2009 by the brothers.

Meghan and Prince Harry eventually broke away from the Royal Family in March this year and never launched their own foundation under the name Sussex Royal.

Paperwork filed on the Companies House website show the Duke and Duchess of Sussex have changed the name of this organisation to the MWX Foundation, with Prince Harry becoming the sole director.

Prince Harry and Prince William are the two sons of Prince Charles and Diana (Image: EXPRESS)

The pair are now working behind the scenes on their new project, the Archewell Foundation.

In her most recent solo appearance, the Duchess of Sussex briefly mentioned her charitable platform during a one-on-one virtual panel at the Fortune Most Powerful Women Summit.

Focusing her chat on shaping a kinder and more humane experience online, the Duchess of Sussex said: “Part of our focus with the Archewell Foundation is to just ensure that we are helping foster healthy positive communities—online and off—for our collective wellbeing.