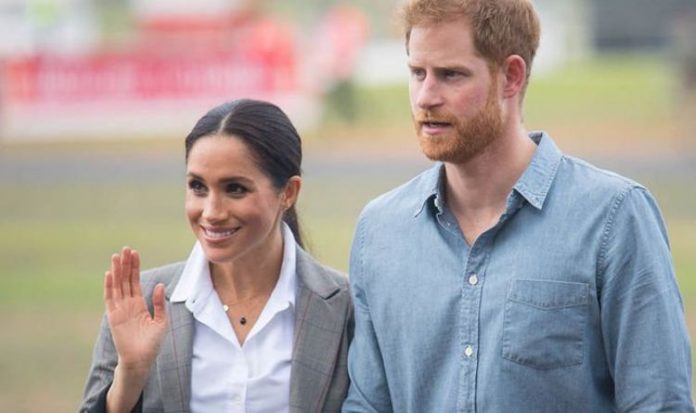 Meghan and Harry are “embarrassing” the Royal Family by agreeing to take part in a 90-minute-long interview with world-wide famous US TV host Oprah, according to royal correspondent Rebecca English. Appearing on Mail Plus’ Palace Confidential, Ms English said of the upcoming interview: “I should stress, it is largely being Meghan interviewed, although we are told Harry will come in towards the end to speak about their future plans.”

The Daily Mail royal correspondent added: “Now, their spokespeople have been briefing this week that she will do nothing to embarrass the Queen.

“But I think it kind of misses the point – the fact that they are doing this interview is an embarrassment in itself because, as we have seen over the years, when it came to Diana, the Prince of Wales and more recently the Duke of York, when the Royal Family do these sit-down tell-all interviews they don’t end well and they realise that’s not what they should be doing.

“As I said before, I think it emphasises this schism between the way Harry and Meghan are conducting themselves moving forward to the way the Royal Family traditionally conduct themselves in the UK.”

This interview is to air on March 7 in the US and, as stated by journalist and friend of the Duchess Gayle King, nothing has been deemed off-limits.

Meghan Markle ‘has a lot to say’, a royal commentator said ahead of the Oprah interview (Image: GETTY)

Speaking during CBS This Morning, Ms Gayle spoke about Oprah working on the interview saying: “I know she’s been working on the questions all weekend long.

“She can ask anything she wants. A lot of people wanted this interview.

Meghan Markle and Prince Harry are to take part in an interview with Oprah next month (Image: GETTY)

A statement issued by US broadcaster CBS said the interview will be split into two parts, with more than the first half being dedicated only to Meghan.

During their face-to-face chat, CBS said Oprah will touch upon a wide range of topics, including Meghan’s arrival into the Royal Family, her nuptials, motherhood and how she has been coping with living under the public eye.

Prince Harry is to join the pair later and speak about the couple’s hopes, plans and dreams for the future.

Richard Eden, the Saturday Diary editor at the Mail, issued a warning to the Royal Family in the run-up to the interview.

Meghan Markle and Prince Harry have been asked to return their royal patronages (Image: GETTY)

Meghan Markle and Prince Harry told the Queen they are not returning as senior royals at the end of March (Image: GETTY)

Asked how much editorial control does he think the Sussexes will have agreed upon ahead of the interview, Mr Eden said during Palace Confidential: “It’s a really tricky one for Oprah and fascinating.

“She has built her amazing reputation on really getting the most out of guests, getting them to confess things they never normally would, that’s the basis for her success.

“So no way would Oprah want it to be some sort of sycophantic loving with Meghan, she will want some hard questions.

“And I’m sure Meghan has a lot to say, we have seen that even with the Tom Brady documentary that was meant to be on their work in Africa, that became a bit of a winge about the couple themselves.

“I think there is no question Oprah will ask difficult questions and I think she will get answers.”

Meghan opened up about how she struggled to deal as a new wife and mother under the public scrutiny during an interview with Tom Bradby filmed for the documentary focused on the Sussexes last tour abroad Harry & Meghan: An African Journey.

Meghan and Prince Harry officially stepped down as senior royals at the end of March last year.

As fleshed out in the so-called Megxit agreement, the Duke and Duchess of Sussex can no longer carry out royal duties or use their HRH styles.

In turn, they have been allowed to become financially independent, live abroad and retain their private patronages – including Mayhew, Smart Works and the Invictus Games Foundation.

But, as announced today by Buckingham Palace, the Queen has requested the Sussexes to return their royal patronages after they told her they have no intention to return as full-time working royal at the end of the 12-month review period agreed in January last year.

The statement issued by the Palace read: “The Duke and Duchess of Sussex have confirmed to Her Majesty The Queen that they will not be returning as working members of The Royal Family.