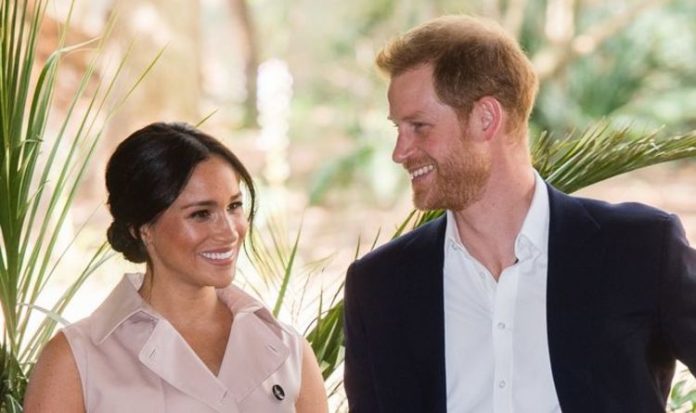 The Duke and the Duchess of Sussex revealed that the are working on their first podcast with the streaming service, which is set to air later this month as a holiday special. But outraged social media users denounced the couple’s latest move with some calling for them to be stripped off their royal titles as they reached a new milestone.

Another user added: “I see their ‘escape from the limelight’ to ‘protect their family’ is going well. Really keeping their heads down.”

A third person said: “Drop the duchess. You left UK & Royal family to do your own thing.

“Lied about it but we all knew so since you want nothing to do with it why keep a title?

“[Because] it pays more to be connected to the Royals vs on your own for decades in Hollywood & never got this much attention.”

Another user said: “Remember that time Meghan Markle was so upset with media involvement in her life that she signed a deal with Disney, Netflix, and Spotify all in the same year? Same.”

Some royal fans defended Harry and Meghan from their critics’ remarks and welcomed the “amazing” news.

One Twitter user wrote: “I came here to see all the comments from people who were complaining that Harry and Meghan were spending too much of their tax dollars, now complain about Meghan and Harry earning an income and therefore should be stripped of their titles.”

He said in a statement: “The Duke and Duchess of Sussex may live in California, but the power of their voices rests in their status as citizens of the world.

“That they are embracing the extraordinary capacity of podcasts on Spotify while also seeking to elevate underrepresented voices is a testament to their appreciation for the potential of audio storytelling.