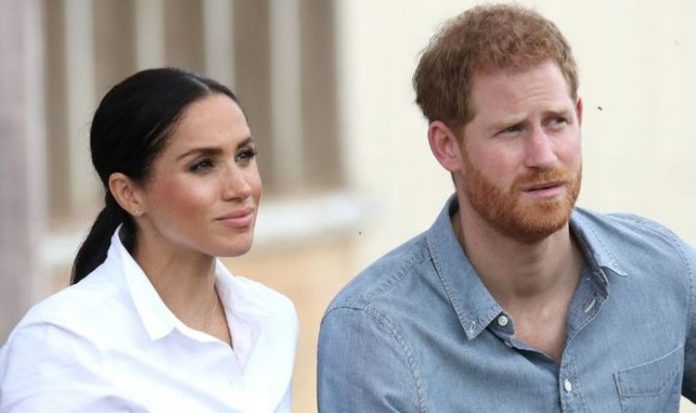 The Duke and Duchess of Sussex yesterday announced they are expecting their second child. And today it was revealed the couple – who quit royal duties for a new life in America – are to be interviewed by US talk show host Oprah Winfrey next month.

Good Morning Britain presenter Mr Morgan described the news of their bombshell interview as “beyond parody”.

He tweeted: “The Duke & Duchess of Privacy have given an exclusive ‘wide-ranging’ prime-time interview about their private lives to Oprah Winfrey for a 90-minute special airing on CBS on March 7.

“This is beyond parody, but true.”

Writing in his Mail Online column, the former newspaper editor accused Meghan, 39, and Harry, 36, of “brazen hypocrisy” over their baby announcement.

The Sussexes released a black and white snap showing Meghan, who has a blooming bump, resting her head on Harry’s lap as they pose under a tree.

The former actress is wearing a flowing dress, while the Queen’s grandson is barefoot.

A spokesperson for the couple said Archie was “going to be a big brother” and they were “overjoyed”.

Mr Morgan insisted the announcement shows the pair “don’t have any real desire for privacy”.

He fumed: “They just want the right to use the media to promote themselves when it suits them, and trash and ban them when it doesn’t.

“In fact, it’s quite clear that the pair of them crave attention and publicity like ravenous jackals gorging on the carcass of a freshly slain gazelle.

“Since they quit Britain and royal duty 13 months ago, barely a week has gone by without a new grainy self-promoting Zoom chat, statement or interview being released from their Santa Barbara mansion, or announcements about their latest lucrative multi-million-dollar commercial deals with the likes of Netflix or Spotify, or leaked details of power-broker meetings with top politicians like California’s governor Gavin Newsom.

“They know all this publicity is key to their success and bank balance, and they depend on the media they profess to loathe to deliver it.”

DON’T MISS
Meghan and Harry interview with Oprah – when is it? How can I watch? [ANALYSIS]
Meghan Markle pregnant: Expert speaks of baby’s future citizenship [INSIGHT]
Harry ‘doing utmost’ to come back for ‘busy summer’ to ‘celebrate’ [VIDEO]

Mr Morgan added that he finds it “contemptible that they continue to exploit their royal titles in such a ruthless greedy way without doing any of the hard graft that other royals back home in the UK have to do to earn their keep”.

He continued: “As I’ve said many times, they want to have their royal cake and eat it, and they shouldn’t be allowed to trade off their royal connections like this.”

Meghan and Harry are living in an £11million mansion in California with their young son Archie after ending royal duties last March.

Since quitting the monarchy, they have signed lucrative deals with Netflix and Spotify.

They will open up about Megxit in their televised interview with Oprah, who attended their royal wedding, which airs on March 7.