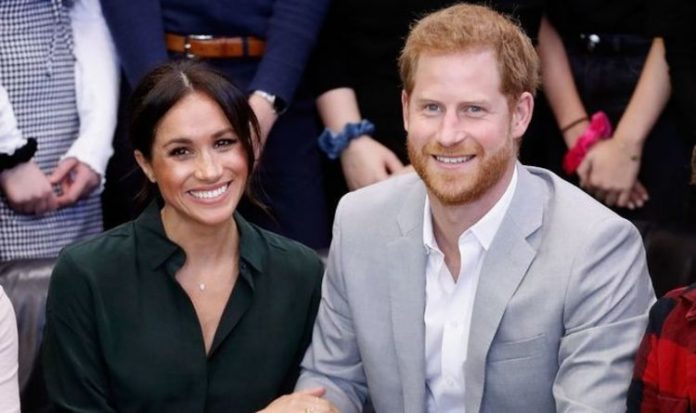 In July, the Duke and Duchess of Sussex left their lives behind in the UK to move into a new nine-bedroom home in the picturesque seaside town of Montecito, Santa Barbara, which is located around 100 miles north of Los Angeles. The luxurious property also came with a play structure for their young son Archie, with plenty of outdoor space for the whole family to enjoy. Meghan and Harry have settled quickly into their new surroundings and are making the most of living in a more private community – something they craved while living in the UK.

The Duke and Duchess have even been able to go out on dates with each other, as well as on group dates with little intrusion and barely any presence from the international media.

A source close to the couple told People magazine: “Sometimes they do solo dates and sometimes with friends. No one really bothers them.

“The Montecito house feels like their home, and they couldn’t be more grateful.”

Meghan and Harry have been pictured out in Montecito on a double date with close friends Katharine McPhee and David Foster.

The Duchess was recently seen wearing a long camel sweater, cropped leather pants, a trench, and orange mules outside Lucky’s steakhouse in the picturesque town.

The couple also both wore face masks as part of protection against the rapid spread of coronavirus.

They both recently explained the ongoing pandemic has meant they have been able to spend more time together as a family over recent months.

During a conversation with activist Malala Yousafzai for International Day of the Girl, Meghan said: “In the absence of COVID, we would be traveling and working more.”

“I had a personal account years ago, which I closed down and then we had one through the institution and our office that was in the U.K. that wasn’t managed by us—that was a whole team—and so I think that comes with the territory for the job that you have.

“I’ve made a personal choice to not have any account, so I don’t know what’s out there, and many ways that’s helpful for me.

“I have a lot of concerns for people that have become obsessed with it, and it is so much a part of our daily culture for so many people that it’s an addiction like many others.

“There are very few things in this world where you call the person who’s engaging with it a user, but if you look at social media and what it’s doing in the same capacity in which it does creating addiction, what is the comp there?

Meghan continued: “I would just say as you are out there building your brand, as you are out there engaging with your friends online, just be conscious of what you’re doing and understand that it is not limited to that one moment, that you are creating an echo chamber for yourself.

“So the more that you engage with things that are negative – not just for other people that you might not know – but what it’s doing to you as a human being will really have lasting effects.

“That there is an alternative to engaging in that kind of stuff so I would just say to be very conscious and responsible.

“I don’t think people have even started to scratch the surface on what this is doing to us and I wish more for especially the younger generation of women. You have the power to turn this around.”