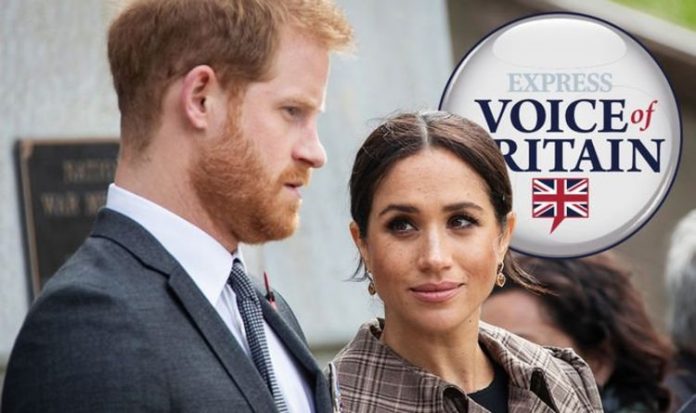 Meghan Markle and Prince Harry shocked the world when they announced last January they would be stepping down as senior royals. One year on, and to mark the one-year Megxit anniversary, Express.co.uk conducted a poll on how the couple is perceived by its readers. The survey, which comprised of five questions, indicated Britons’ opinions of the Sussexes had changed for the worse.

The Duke and Duchess of Sussex now live in Santa Barbara, California, with their 20-month-old son Archie, having moved to the US after officially cutting ties with the Royal Family.

The couple has participated in a number of virtual events during the coronavirus pandemic and has signed a number of lucrative commercial deals, as they embark on their bid to be “financially independent”.

But as Meghan and Harry embark on their new life 5,000 miles away from the rest of the Firm, Express.co.uk asked its readers if their opinion of the couple had changed in any way.

The poll asked: “Has your opinion of Meghan and Harry changed one year after Megxit?”

Just three percent (880 people) said their opinion of the couple had changed “for the better”, while 17 percent (4,377 people) indicated their opinion remained unchanged, and voted “no”.

One percent of respondents (217 people) opted for “don’t know”.

Readers then took to the comments to explain why their opinion of the couple had changed in the 12 months since Megxit was first announced.

One person wrote: “Yes my opinion of them has changed, now I see them for the fame hungry, money grabbing grifters that they are.”

JUST IN: Prince Harry WILL return to royal family without Meghan Markle

They wrote: “My opinion of H&M’s behaviour deteriorates every day: just like their ultra-mercenary behaviour.

“But now my opinion of the RF is deteriorating also: for SUPPORTING H&M’s behaviour.”

Several other readers said their opinion remained unchanged, as they had long viewed the couple negatively.

One person said: “Nope, not changed my mind.. They are still a worthless pair of idiots.”

A second reader wrote: “We never had a good opinion of her. Love is blind, everyone else isn’t.”

A third said: “My opinion of them is not any better one year on than it was when they opted out of their royal duties.”

The Express.co.uk poll was carried out from January 15-20 and saw 25,974 people respond. 158 people decided not to vote on the question discussed in this article.