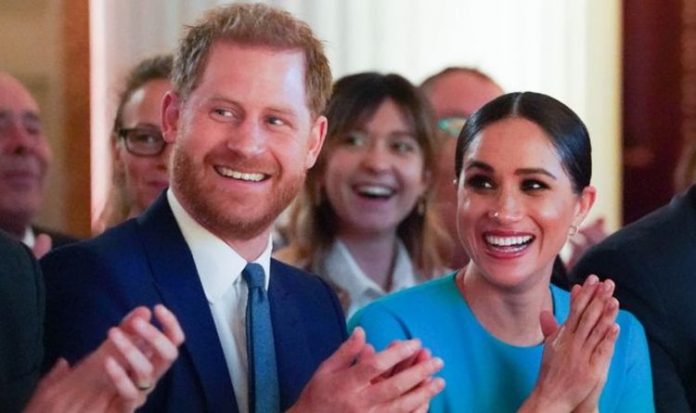 Eugenie and Jack, who tied the knot in 2018, welcomed a little boy on Tuesday. The Duke and Duchess of Sussex, who are living in America after quitting royal duties, are understood to have privately congratulated the couple on the arrival of their first child – a move which suggests the fallout over Megxit has not damaged their friendship.

Harry, 36, is thought to be close to his cousin Eugenie, 30. He and Prince William enjoyed skiing holidays with the Yorks in the 1990s when they were youngsters.

Eugenie and Jack’s tot arrived on Tuesday at 8.55am, weighing 8lbs 1oz.

The royal gave birth at the private Portland Hospital in London – where she was born and where Meghan had Archie in 2019.

The statement said: “Her Royal Highness Princess Eugenie was safely delivered of a son today, February 9 2021, at 8.55am at The Portland Hospital.

“The Queen, the Duke of Edinburgh, the Duke of York, Sarah, Duchess of York, and Mr and Mrs George Brooksbank have been informed and are delighted with the news.

The caption had three blue hearts and two exclamation marks.

Prince Charles and Camilla also congratulated Eugenie and Jack on their little boy.

The Prince of Wales and the Duchess of Cornwall said on social media: “Congratulations to Her Royal Highness Princess Eugenie and Jack Brooksbank on the birth of their son.”

The Duke and Duchess of York have become grandparents for the first time.

Sarah made a sweet nod to grandmothers in a video on her Storytime with Fergie and Friends YouTube channel on Wednesday.

She was making and decorating unicorn magnets in the clip and said: “I got these off Amazon – these little colouring unicorns but what you could do is you could draw them, actually mummy and daddy, aunts and uncles, granny and grandpa, you could all draw your own little unicorn here.”

As she mentioned the words granny and grandpa, she raised her voice and pointed at the camera.

Eugenie and Jack have not yet revealed their baby’s name, with James and Philip favourites at the bookmakers.