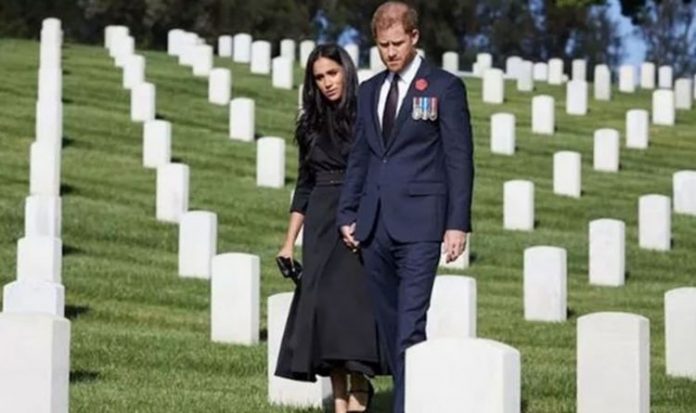 Meghan Markle, 39, and Prince Harry, 36, were absent from the annual commemoration at the Cenotaph in London, having begun a new life in California after stepping down as working royals. A spokesman for the couple said it was important to them “to be able to personally recognise Remembrance in their own way”. But the royal couple have come under fire over the timing of the photos they released – with one radio host claiming the pair would have known the release of their pictures “would push pictures of the Queen, Prince Charles, William, Kate, Princess Anne off the front pages”.

Speaking to talkRADIO, commentator Dawn Neesom said: “I saw these pictures this morning and it looked like a fashion shoot.

Presenter and royal expert Dan Wootton added: “Here’s the thing, I would have no issue if Harry and Meghan had announced that they had privately gone to the cemetery in LA and had their own private moment there.

“That would have been fine.

“But what people don’t realise is there’s a lot of organisation behind the scenes that goes on about the release of photographs and the way that things are geared up to run in newspapers.

“They dropped these pictures at exactly the time that all the British newspapers were going to press.

“This is particularly grim, they knew that in certain newspapers it would push pictures of the Queen, Prince Charles, William, Kate, Princess Anne off the front pages.”

Harry and Meghan laid flowers that Meghan picked from their garden at the gravesites of two Commonwealth soldiers, one who had served in the Royal Australian Air Force and one from the Royal Canadian Artillery.

A spokesman for the couple said: “It was important to the duke and duchess to be able to personally recognise Remembrance in their own way, to pay tribute to those who have served and to those who gave their lives.”

Harry earlier described the day as “a moment for respect and for hope” during an appearance on a military podcast.

Prince Harry is believed to be “deeply saddened” after his request to lay a wreath at the Cenotaph on his behalf was denied by courtiers due to him no longer being a working member of the Royal Family.

The Queen is believed to be unaware of the request from Harry.