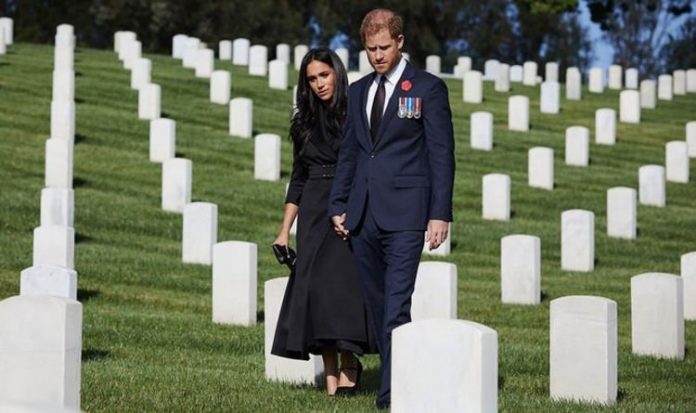 It comes after their request to have a wreath laid at the Cenotaph in London was rejected.

Harry, 36, and Meghan, 39, laid flowers picked from their garden at the graves of Ronald Scott, of the Royal Australian Air Force, and Captain William Quayle Setliffe, of the Royal Canadian Artillery.

They also placed a wreath by a plaque which features the inscription: “In memory of the men who offered their lives in defence of their country.”

The wreath bore a message signed by Harry: “To all those who have served, and are serving. Thank you.”

TV presenter Piers Morgan accused the couple of “treating Remembrance Sunday like a PR opportunity and trying to steal headlines from the real royals doing their duty back home”.

He added: “They launched a PR stunt with a preferred photographer to take the attention away from the royals back in London. Because they felt thwarted.

“They want their royal cake and they want to eat it.”

But a spokesman for the Duke and Duchess of Sussex insisted it was not a publicity stunt.

He said: “It’s probably not surprising that having served on the front line, having done tours of duty, having been in the military, that the military community is probably one of the most important things to the Duke and will always be so.”

The spokesman admitted Harry was disappointed after Palace officials refused his request for a wreath to be laid on his behalf at the Cenotaph. It was rejected as he is no longer a working Royal and has no military patronages.