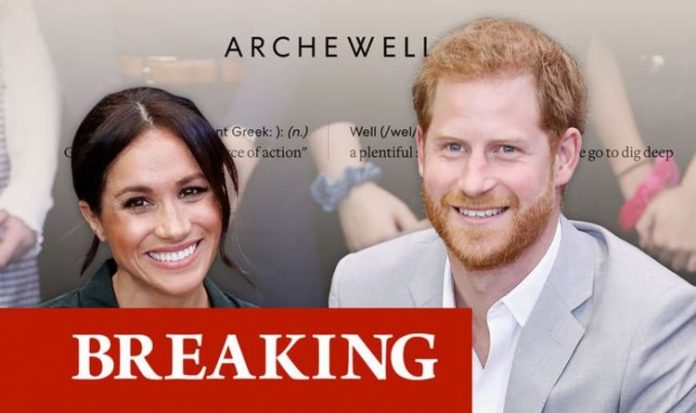 Meghan Markle and Prince Harry unveiled the name of their new charitable organisation earlier this year, but the official launch of Archewell had been put on hold in response to the coronavirus pandemic. But now it appears the couple have decided to secretly kick-start the organisation, with the landing page of the website going live yesterday.

The homepage has the the title “Archewell” in large letters, followed by the dictionary definition of the words that make the brand, “Arche” and “Well”.

“Well… a plentiful source or supply; a place we go to dig deep.”

It also provides a Beverly Hills in California postal address as well as an email address to contact.

Meghan and Harry moved to California earlier this year, following their official split from the Royal Family.

The couple are currently living in a £11million mansion in Santa Barbara.

In March the Duke and Duchess filed paperwork to register Archewell as an organisation.

JUST IN: Meghan Markle’s comeback after ‘not your average American woman’ snub

It reads: “We may share the information we collect with other parties, including the following: With third-party service providers who process data on our behalf, such as email service providers; With other charitable, nonprofit, and for-profit ventures associated with The Duke and Duchess of Sussex that exist now or may be established in the future.”

The Archewell website went live yesterday and coincided with the couple’s appearance on a video chat with Time magazine.

Meghan and Harry hosted an episode of TIME100 talks, which focused on the state of our digital experience, with the pair highlighting the impact of social media and misinformation.

The episode, themed around the topic of “Engineering a Better World”, coincided with the Sussexes desire to create a safer, more compassionate and trustworthy space online.

The Sussexes hosted a number of guests and discussed how the internet affects critical issues such as racial justice, gender equity, climate change and mental health.