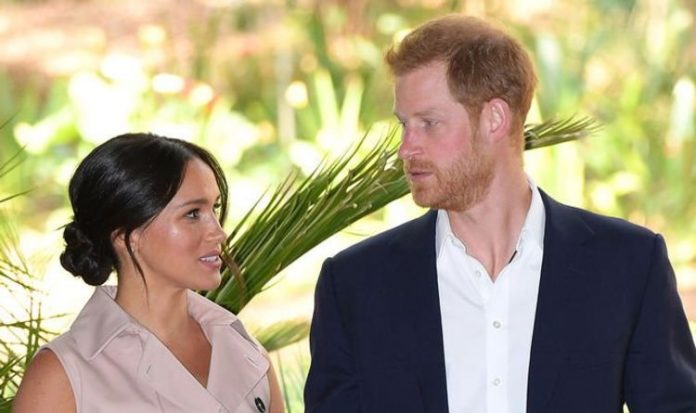 The Duke and Duchess of Sussex phoned a fan to thank her for her support and for raising £45,000 ($58,500) for charities like Camfed ‒ which champions female education ‒ telling her they were “so moved and happy”. However, the fan in question, Dani Trin, was linked to a Twitter account, which had trolled Kate Middleton and the Royal Family with vile, misogynistic and foul-mouthed abuse. Posts referred to the Duchess of Cambridge as a “b****” and Prince William as an “a**hole”, while another called the monarchy a “s***, messy, toxic institution”.

Meanwhile, Meghan and Harry are outspoken advocates against online hate, having been victims of it themselves.

An analysis by Hope Not Hate found that the Duchess was subject to 5,200 hateful tweets in just two months, with 70 percent coming from just 20 accounts.

Harry recently spoke out against this in an opinion piece for US business magazine Fast Company, in which he claimed social media was stoking a “crisis of hate”.

In the article, he urged social media platforms to harden their approach towards hate and abuse on their website.

Kate and William were the target of some of the troll’s abuse (Image: GETTY)

He and Meghan also supported the Stop Hate for Profit movement in June, in which a coalition of nonprofits urged companies to not advertise on Facebook for a month, to push the Mark Zuckerburg-owned social media giant to tackle its problem with hate more effectively.

More than 1,000 companies engaged with the campaign and withheld $7billion (£5.4billion) of ad revenue from Facebook, according to the Duke.

It is perhaps ironic that Meghan and Harry are so hot on social media, with their swish Sussex Royal Instagram account ‒ which they no longer add to ‒ and are so outspoken against hate on social media, that their team would fail to pick up on the fact that this person they were thanking was linked to trolling herself.

Indeed Ms Trin runs an account, from which someone had sent horrible, foul-mouthed attacks on their in-laws, although she insisted she was not responsible for the posts herself.

Nevertheless, her association with the account rapidly spread around Twitter, creating an embarrassing situation for the Sussexes.

One of the posts from the account known as Henry’s Cousin read: “Meghan Markle is not one of your little ugly a** British aristocratic vapid do-nothing b*****s and y’all gotta learn.”

Another said: “Meghan after having to deal with the wedding dress, tiara, venue, flowers, food, music, her father’s imbecility and this b**** throws a tantrum in the middle of her bridesmaids’ dress fitting over some tights.”

A third added: “The way that Harry and Meghan aren’t part of that s***, messy, toxic institution anymore is most pleasing to me.”

Mr Myers was astonished that this was not picked up by Meghan and Harry’s team, asking incredulously: “Who is running their social media team?”

He claimed that, while the couple are not running any social media channels at the moment, they will certainly have a team of advisers for how they should navigate the online space.

He said: “It looks like they’ve got their fingers burned with this.

“We had noticed this becoming an issue on Twitter, there were a lot of people mentioning it, and that’s why we obviously did the story.

“Meghan and Harry phoned a fan connected to a Twitter account that had posted vile abuse about Kate, Wills and the Royal Family to thank her for her enthusiastic support.

“Now this evolved from two individuals on Twitter who had done a hashtag, part of the Sussex Squad raised £45k for charities which was part of Camfed ‒ an amazing organisation about education in Africa.

“However, it then transpired that at least one of these people had been putting on the most vile, misogynistic, racist abuse.

“And I thought the fact that it wasn’t picked up by Harry and Meghan’s team when it was being bandied around Twitter and everybody was talking about it, even before we did it as a story shows you… who is running their social media teams or who are they even speaking with?

“I know they haven’t got a social media presence at the moment but they certainly do have a team and surely someone should have recognised that this awful rhetoric was being bandied around.”

Ms Gripper emphasises that Ms Trin was one of the people who had access to the account, so it might not have been them that posted the specific messages, but they were someone who was associated with that account.

She added: “It started as a good thing, as calling someone to thank them for raising some money, but actually the person they were phoning it turned out there was a whole other hinterland of issues.

“And I know that this is something that a lot of people in the royal social media circle of fandom have been very exercised about because our Twitter mentions went absolutely mad for it when it kicked off.”