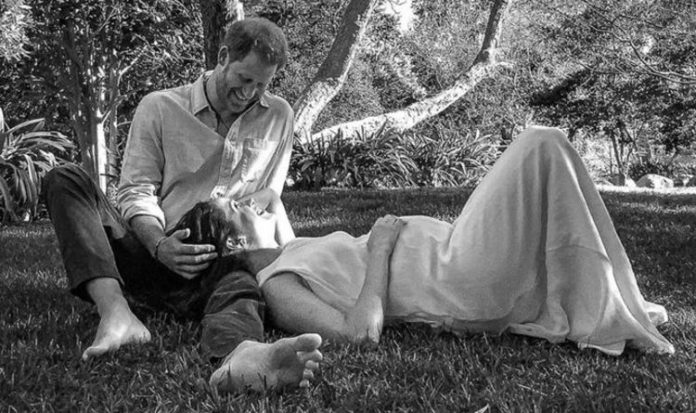 Misan Harriman took a stunning snap of the Duke and Duchess of Sussex which was released when the couple announced they are expecting their second child. The photographer hailed Meghan’s pregnancy as a “testament to the power” of their relationship.

He told Good Morning America: “Honestly I think the universe would have conspired for them to be together no matter what.

“It is the real deal. They are waltzing through life together, as it should be.

“To have a new arrival coming is a testament to the power of the relationship that they have.”

The black and white image shows the couple posing under a tree, with Meghan laying her head in Harry’s lap as she rests a hand on her baby bump.

Mr Harriman, who is a friend of the couple, took the image remotely from London using an iPad.

He said: “In the age of Covid, it’s impossible obviously for me to be there to shoot it, so technology came to rescue.

“I was able to remotely take over the iPad and they could hear my voice and it was conversational and the rest really is history.”

Mr Harriman added that Meghan and Harry are “lost in each other” in the picture.

Mr Harriman took to Twitter to congratulate the Sussexes following the announcement.

He said: “Meg, I was there at your wedding to witness this love story begin, and my friend, I am honoured to capture it grow. Congratulations to The Duke and Duchess of Sussex on this joyous news!”

Speaking to British Vogue, the photographer added: “To be asked to help share this absolute joy after such an unimaginable loss and heartache is a marker of true friendship.

“Meg reminded me that had I not introduced her to a mutual friend then she wouldn’t have met Harry.

“I’m grateful for whatever small part I played.”

On how he captured the image, he said: “With the tree of life behind them and the garden representing fertility, life and moving forward, they didn’t need any direction, because they are, and always have been, waltzing through life together as absolute soulmates.”