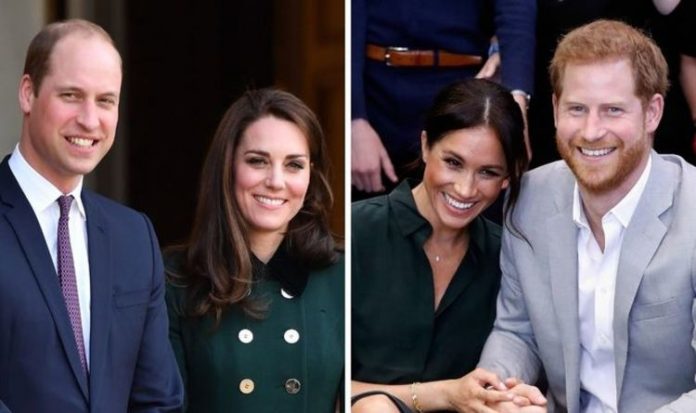 Royal fans were left delighted after hearing Archie speak for the first time, as he wished listeners of the Archewell Audio podcast a Happy New Year. Archie, who is 18 months old, made the surprise appearance in the first full-episode of the podcast, which featured celebrities such as Sir Elton John and James Corden. On the broadcast, Meghan can be heard asking Archie if he was having fun, to which the youngster replied: “Fun!”

He was then coaxed into wishing the public seasonal greetings, which left Harry laughing with pride.

Archie’s debut follows hot on the heels of Harry’s brother William and his wife Kate’s decision to post a video of their children speaking for the first time earlier this year.

Prince George, Princess Charlotte and Prince Louis all got the chance to speak directly to TV legend and naturalist Sir David Attenborough, asking him a series of questions.

This move was unprecedented as it was the first time Royal Family fans heard Louis talking.

It could appear, then, that Meghan and Harry’s decision to welcome Archie on to the airwaves mirrored that of William and Kate.

When the Cambridge youngsters quizzed Sir David, each of their questions involved the plight of animals, with two-year-old Louis stealing the show by asking him what his favourite species was.

Sir David explained he “liked monkeys best… because they’re such fun”, adding that they “jump all over the place, and then don’t bite – although some do but they’re very careful”.

JUST IN: Archie speaks publicly for first time in Harry and Meghan’s podcast

George, seven, wanted to understand which animal would become extinct next, leaving Sir David to detail what can be done to ensure “there won’t be any”.

The broadcaster then told Charlotte, five, that he “loved spiders”, when asked if he was a fan of the creepy-crawly, adding: “Why is it that people are so frightened of them?

“I think it’s because they’ve actually got eight legs, which are much more than us.”

Harry and Meghan’s podcast was the first as part of an estimated £30million ($40million) deal with streaming platform Spotify, an agreement that closely followed the multi million pound Netflix deal the pair also struck.

During the broadcast, the couple reflected on the year, with the Duke of Sussex telling listeners we should “hold on to the lessons we’ve learned about how important it is to take care of one another”.

At the end of the show, the gospel song This Little Light of Mine played, a tribute to their wedding day, as the song was performed at the end of their ceremony.

Meghan said: “From us I’ll say no matter what life throws at you guys, trust us when we say, love wins.

“This Little Light of Mine played at the very end of our wedding… while we were walking down the steps of the church.”

The Duchess quoted Martin Luther King, adding: “It was the music that we wanted playing when we started our lives together.”

It’s not the first time a royal has appeared on a podcast, as Kate made Royal Family history with her decision to talk about parenthood on Happy Baby, Happy Mum, hosted by I’m A Celebrity Get Me Out of Here! winner Giovanna Fletcher in April.

She told the broadcaster that she believed all mothers suffer from “mum guilt”, and that “anyone who doesn’t as a mother is lying”.

In 2019, Princess Eugenie nearly made Royal Family history by hosting her own podcast, but it was postponed as a result of issues arising from her father Prince Andrew’s relationship with paedophile Jeffrey Epstein.