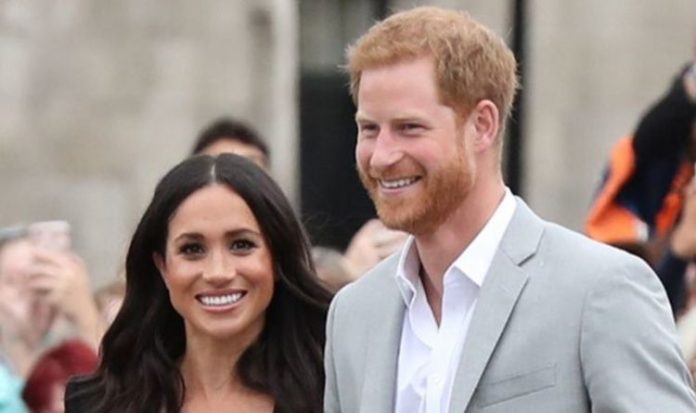 The chances of seeing Meghan and Harry return to live in the UK anytime soon appear rather slim as the couple have established their private and working life in California, an expert has noted. Royal commentator Richard Fitzwilliams said: “It has become clear that, having relocated to Los Angeles, that they see their future in the US.

“They achieved financial independence with a substantial deal with Netflix and another with Spotify for podcasts.”

Meghan and Prince Harry announced their multi-year deal with Netflix in September.

While both the streaming platform and the Duke and Duchess of Sussex have remained tight-lipped on the size of this deal, some experts believe it could be worth as much as £75 million, given the royal status of the couple and their worldwide popularity.

Working with Netflix, Meghan and Harry are set to become producers of TV shows, children programming and documentaries.

Meghan Markle joined the Royal Family in May 2018 (Image: GETTY)

Earlier this month, the Duke and Duchess of Sussex also shared the news of a partnership between their newly-created production company Archewell Audio and Spotify, a music streaming platform.

This will see them producing and hosting podcasts aiming to inspire and entertain the public.

While the first full series is to go live in 2021, the Duke and Duchess of Sussex have announced a holiday special episode will air before the end of this year.

In the trailer for this new collaboration released on Spotify’s website, Harry said: “That’s what this project is all about, to bring forward different perspectives and voices that perhaps you haven’t heard before and find our common ground.”

Meghan added: “We’re talking to some amazing people, they’re going to share their memories that have really helped shape this past year which has been, as we know, a difficult one for everyone.”

Prince Harry and Meghan moved to Los Angeles a few days before they officially relinquished their senior royal statuses on March 31.

The couple lived with their son Archie Harrison for a few months at producer Tyler Perry’s mansion.

In July, the Duke and Duchess of Sussex moved into their first home, acquired through their own money and a mortgage, according to royal author Omid Scobie.

Ever since stepping down, Meghan and Harry have become more vocal on issues other royals have typically shied away – such as voter registration and racial inequality.

Over the summer, Meghan was accused of breaking the royal rule of political neutrality by taking part in various events and talks during which she spoke about the importance of casting a ballot in the US election.

Meghan Markle and Prince Harry’s son Archie was born in May 2019 (Image: EXPRESS)

In August, attending the virtual event When All Women vote, the Duchess said: “We all know what’s at stake this year”.

Speaking in a video recorded for ABC’s Time 100 special in September, Meghan described the November 3 vote in the US the “most important election of our lifetime”.

In the same video, Prince Harry admitted for the first time he has never voted in his life.

While most commentators simply considered whether the Duchess was overstepping the royal line of neutrality with her comments, other royal watchers including Lady Colin Campbell claimed the Duchess had political ambitions.

She told the Daily Mail in June: “I know the Duchess of Sussex has political ambitions and I’ve been told that one day she wants to run for President.

“I think everything she is doing, leaving the Royal Family and moving back to California is part of her plan and she has taken Harry along with her.”

Mr Fitzwilliams, recalling these claims, said: “The way they have espoused activism has led many to anticipate a possible eventual future in politics for Meghan, who is an American citizen and is extremely articulate.”