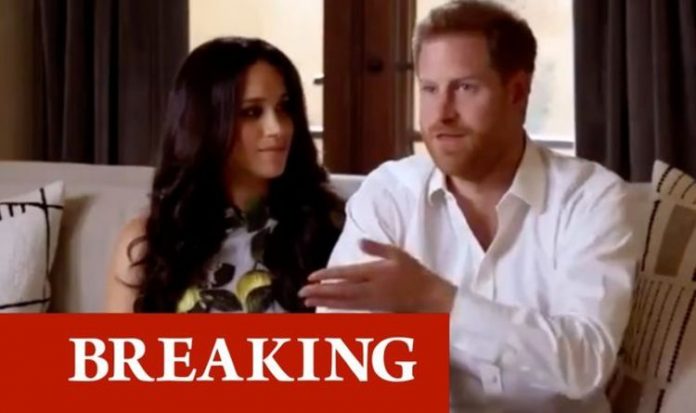 Meghan Markle and Prince Harry have opened up about their plans for Archewell Audio in the latest video to be released of the couple. The Duke and Duchess of Sussex struck a lucrative multi-year deal with music and podcast streaming platform Spotify to create online content. The video comes as the pair also confirmed to the Queen last week that they will not be returning as senior working royals, and so had to return some of their patronages and honours.

The royal were part of the many guests that featured during Spotify’s Stream On event.

This was billed by the tech company as a “virtual live-streamed event exploring the power of audio creation”.

Author Brené Brown and singer Justin Bieber were some of the other “creators” associated with the platform who spoke about the work they will be collaborating on.

Meghan and Harry gave a glimpse into their own forthcoming Archewell Audio content.

READ MORE: ‘Have to make a living!’ BBC hits out at Harry and Meghan condemnation

With music playing over, Meghan can be heard talking about how podcasting can “drive powerful conversations”.

Harry adds that these conversations can “inspire, challenge and educate”.

The Duchess continues: “We created Archewell Audio to make sure we can elevate voices that maybe aren’t being heard, and hear people’s stories.

Harry continues: “The biggest part of this is trying to create a community where you can share.”

The couple will likely be free to do what they want as they told the Queen at the end of last week that they will not be returning to the monarchy.

As a result, they have also returned some of the honorary titles and patronages that they held as working royals.

The Palace has said that the duties will be redistributed among other family members.

In a statement, Buckingham Palace said it was “not possible to continue with the responsibilities and duties that come with a life of public service”.

A spokesperson for the Sussexes assured that they “remain committed to their duty and service to the UK and around the world”, adding that “service is universal”.