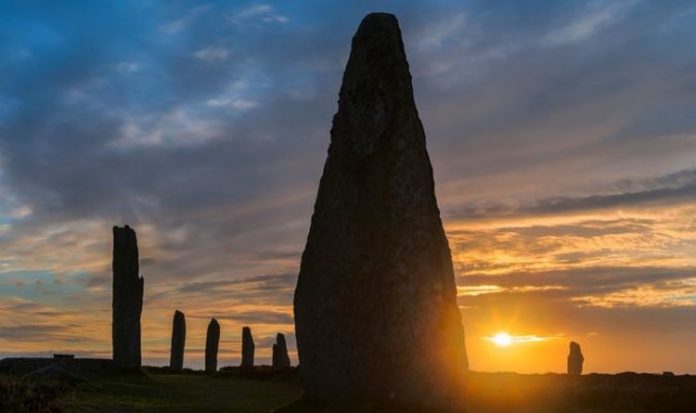 The Ring of Brodgar sits on one of Britain’s northernmost regions. Planted on Orkney’s mainland island, Scotland, the mysterious rock formation has eluded archaeologists for years. In what has been described as the country’s “Stonehenge”, the structure is set in a natural amphitheatre of hills surrounded by a ditch.

Just under half of the original 60 stones survive today, with the site in general possibly occupied for 1,500 years from as early as 3,500 BC.

According to legend, it was a religious shrine, and possibly a place of ritual.

Others believe the ring was built in order to observe the equinox and solstice.

Yet, as Elaine Clarke, the site’s World Heritage Ranger admitted, historians and archaeologists still have no idea as to the stones’ origins.

Archaeology: The Ring of Brogdar sits on the far flung islands of Orkney (Image: GETTY)

“So, as I often say to people, it can be whatever you want it to be, whatever you’re comfortable with.

“We can certainly put suggestions and things forward, but we don’t have conclusive answers.”

The Ring of Brodgar is the only major henge and stone structure in Britain which is an almost perfect circle.

Britain history: Archaeologists are unsure how the rocks might have arrived at the site (Image: Google Maps)

Most henges, in fact, don’t contain circles, with Brogdar as one of the very few exceptions.

Much of the work carried out at the site up until 2008 had provided no conclusive answers.

The Ring of Brodgar Excavation, which ended in July of that year, looked to decode many of the mysteries.

Workers there revealed the largest Neolithic structure ever found in Britain – known as Structure Ten.

Ancient rituals: One theory maintains that the circle was used as a passage to the next life (Image: GETTY)

Neoltihic: The structure is the only major henge in Britain which is an almost perfect circle (Image: GETTY)

It measured an astonishing 82 by 65 feet, and was neither a tomb nor a domicile.

Four stone “dressers” were found inside the structure.

Archaeologists later speculated that it may have been used as an altar.

Then, in 2010, further work uncovered the use of paint in decorating the walls of the stones.

A number of slate tiles were found at the same time, believed to have once been used as roofing material.

Smaller relics, such as the “Brodgar Boy” have also been uncovered, a Neolithic clay figurine.

Measuring just 30mm long, the figure has a clearly defined head, body, and a pair of eyes.

It is one of the earliest representations of the human form to be found in Britain.

While it is still unclear what the ring once symbolised, many believe it holds the keys to understanding the development and evolution of Neolithic religion.

Scotland: People gather during a tour of the stones (Image: Youtube/Orkney.com)

The site’s excavations director, Nick Card, previously noted that “Orkney is one of the keys to understanding the development of Neolithic religion”.

He said that with each discovery, “We’re still really just scratching the surface”.

One continuing theory is that the site is a liminal passage.

This has something to do with a transition of passing during a ritual, still practised in many cultures today.

Researchers there believe that Brodgar could once have facilitated the sort of ritual that ancient peoples believed helped send them on to whatever stage came next in their religion.