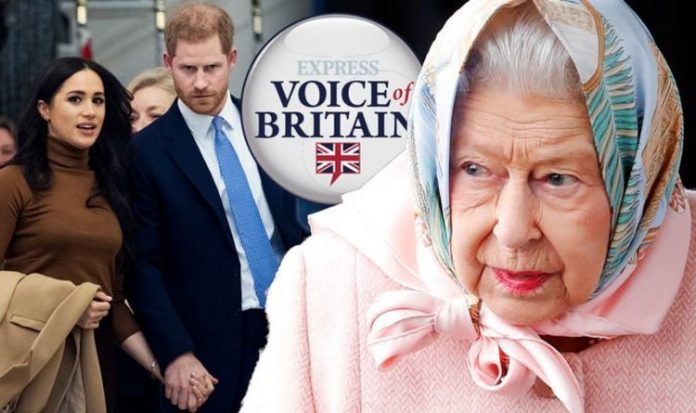 Meghan Markle and Prince Harry announced their plans to step down as senior members of the Royal Family over a year ago, and to mark the Megxit anniversary Express.co.uk conducted a poll on how the couple are perceived by its readers. The poll, which comprised five questions, found Britons were heavily opposed to the Duke and Duchess of Sussex keeping any royal links.

Three questions in the exclusive poll related specifically to Meghan and Harry’s official titles and patronages.

The first asked: “Should Harry and Meghan keep their HRH titles?”

When the couple stepped down it was agreed they could no longer use their HRH (His Royal Highness/Her Royal Highness) titles, but they would still be known as the Duke and Duchess of Sussex.

The second question related to the military titles the Duke was stripped of after splitting from the Firm and asked: “Should the Queen return Prince Harry his three honorary military titles?”

The third question asked if Meghan and Harry should be allowed to retain their patronages, as the Megxit deal enabled the pair to hold onto their existing patronages.

Another reader said: “Harry and Meghan Markle should be stripped of ALL titles and patronages, and furthermore, he should be removed from the line of succession.

“They have insulted Queen and Country and maligned William and Catherine.

“It’s long overdue for the Queen to strip these two hypocritical grifters of ALL titles and patronages–they should NOT be allowed to continue to sponge off of the British taxpayers who continue to fund their lavish lifestyle including the costs of their security, travel and other perks. Pathetic.”

A third wrote: “They have decided to make their home in the USA, so therefore they live as Americans, Americans do not have royalty.

“Their Patronages are over here, even without Covid they are not around to help, they are too busy making money with Netflix, Spotify and their Archwell projects, if you cannot give the commitment you shouldn’t have the kudos.

“These are not vanity projects for them to flaunt, they are real people and real lives, give them up to those that are around to give the time and commitment.”

Another user added: “Our Queen is being played a fool.”