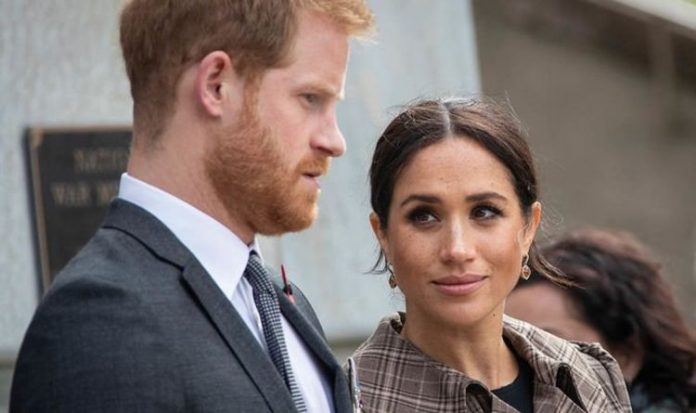 Meghan recently confessed she is being “cautious” with the topics and causes she takes on for the sake of her family. While many interpreted this as a fear for the safety of her immediate family members – Prince Harry and Archie Harrison – one royal expert believes this statement may be hinting to an attempt by the Sussexes to avoid putting at risk their relationship with the Royal Family.

Royal author Robert Lacey told Express.co.uk: “I have detected, from Meghan and Harry’s side, some signs of softening.

“Meghan has recently said she is avoiding controversial topics for fear of putting her family at risk.

“She may be simply speaking about the ugly threat of violence that exists in America where she lives.

“But I think there is another dimension to that, that she realises the statements both she and Harry have put out there – about the US election, about racism in Britain – will be perceived as controversial.

Meghan Markle recently said she is being ‘cautious’ with the topics she speaks about (Image: GETTY)

“Meghan appears to have come to the conclusion that even if she tries to be neutral, her argument is going to be taken one way or the other.

“And perhaps she ought to row back from that and try to stay away from controversy.

“And I think that’s a hand outstretched”.

Mr Lacey recalled the wave of criticism from royal watchers and commentators that followed Meghan and Harry’s comments made in late September and October.

In a video for the Time 100 special in September, the Duchess branded the November 3 US election the “most important election of our lifetime”.

On October 1, the Sussexes marked the beginning of the UK’s Black History Month with an interview during which they spoke about unconscious bias and structural racism in the country.

Speaking about these interventions, Mr Lacey said: “They, to my mind, tried very hard to make those statements neutral.

“And there has been a constitutional expert, I’m thinking of Professor Vernon Bogdanor, who has said Meghan and Harry don’t have to act on the advice of ministers, they must only avoid to embarrass the sovereign, they must not make any partisan comment.

“What they said, the injunction not to vote and the encouragement to do your civic duty, is not a partisan comment – that’s what he said to the Sunday Times in September.”

“I would agree with him, that statement – please vote, and please vote for decency – was neutral and was quite a careful attempt by the two of them to stay within the deal reached with the Royal Family.

“But the day after we woke up to President Trump picking up those comments.

“Similarly with the comments they made about racism in Britain.

“It was Britain’s Black History Month. If they were still full-time working members of the Royal Family, they would be the obvious people to make a statement like that about the problem of structural racism in the country.

“But that was greeted with a storm of criticism.”

Meghan made her comment while attending a Fortune’s Most Powerful Women virtual summit.

Asked whether motherhood had made her stronger or more cautious, the Duchess of Sussex said: “It makes you so concerned for the world they’re going to inherit, and so the things that you’re able to tolerate on your own are not the same.

READ  Report 12/2020: Derailment of a freight train near Wanstead Park

“And that is a shared belief between my husband and I.

Meghan Markle and Prince Harry with the Queen at Buckingham Palace (Image: GETTY)

“At the same time I am cautious of putting my family in a position of risk by certain things, and so I try to be rather very clear with what I say and to not make it controversial, but instead to talk about things that seem fairly straight forward – like exercising your right to vote.”

Meghan herself expressed her marvel at the fact her comments on voter registration have been seen as partisan, according to a source who spoke to royal author Carolyn Durand.

The source told Elle magazine: “Meghan thought she was saying something relatively uncontroversial, which is people should get involved and vote.”

This, the source added, has made the Duchess extra careful about how she approaches politics in public.

The source continued: “Meghan now feels, [and] admits, as she said the other day, she has to be constantly careful about what she says and stick to what she thinks will not be controversial.

“Even telling people to get involved in the democratic process should not be a controversial subject.”