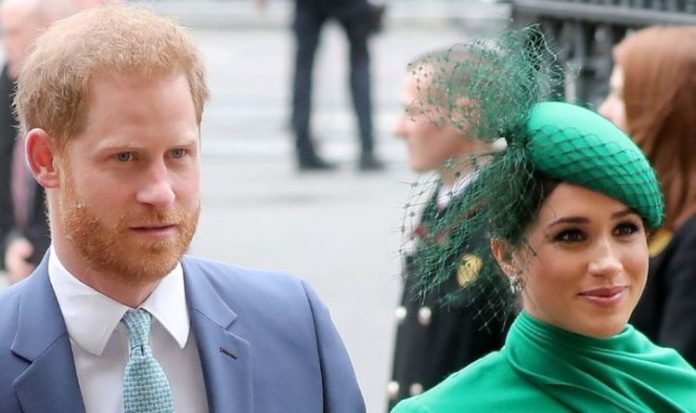 The Duke and Duchess of Sussex have been attacked by a royal biographer, who branded the couple “ludicrous” for their continued campaigning on issues they care about. It comes as Prince Harry has renewed his call for action on climate change this week.

She said: “With these two, it is all about me.

“‘We are all not going to travel, except us, because we like it’. It is just ludicrous.”

TalkRADIO host Mike Graham agreed, pointing to the fact the Duke and Duchess had not returned to the UK this year to be with Harry’s elderly grandmother, the Queen.

He said: “It really is. And when we think about what the world has gone through this year in particular, it is not really anyone’s fault that people are far away from one another.

“But there does not seem to be any urgency from California from Harry and Meghan to come back and see Prince Philip, who is not getting any younger.

“The Queen is also racking up the years, and anybody else in the family.

“They could have come home for Christmas, couldn’t they? It’s not as if they’re spending it with her dad.”

Despite the criticism, Prince Harry and Meghan have been praised for their work in raising awareness of important social issues.

The Duke of Sussex recently called for action on climate change and underscored the importance of protecting the natural world.

Harry was voicing his support for a new platform, the WaterBear Network, dedicated to climate documentaries.

Praising the Duke for his intervention, co-founder of the WaterBear Network Ellen Windemuth said Prince Harry’s contribution was invaluable.

Speaking to ABC’s HeirPod podcast from her base in Amsterdam she said: “It is so significant. It is so meaningful.

“He is such a great young leader that I don’t think you can knock him in any shape or form.”