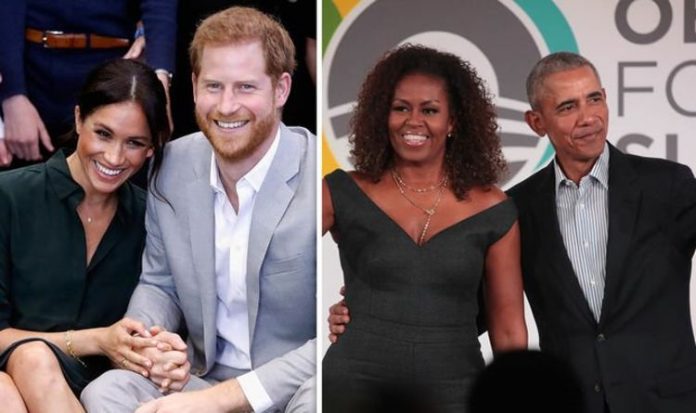 The deal Meghan and Prince Harry have struck with the US streaming platform that trumps the one signed by Michelle and Barack Obama when they left the White House, according to an expert. While the size of the deal has been kept a secret by both the Duke and Duchess of Sussex and Netflix representatives, some experts believe its value could range between £35 to £75 million.

believes Meghan and Harry’s deal could stretch to £122million.

Speaking about the size of the Sussexes-Netflix contract, the expert said:

“This is an economic earthquake for a streaming company and trumps the Obamas in size for sure.

“It sets on fire anything Harry and Meghan have done before in terms of precedent.”

Mr and Mrs Obama signed a production deal with Netflix in May 2018.

The multi-year contract has seen the presidential couple creating documentaries such as BAFTA-nominated American Factory.

Meghan and Harry have also been requested to produce documentaries, docu-series, children’s programming and TV shows.

The trademark applications filed for Archewell earlier this year suggest the couple may focus their attention on topics such as feminism, lifestyle, mental health and wellbeing and education.

Mr Schiffer also highlighted the Duke and Duchess of Sussex are novices in the production industry and maybe under a tremendous amount of pressure to deliver.

He told Newsweek: “I think they’re going to have tremendous pressure to show they can create a quality product.

“My bet is that they’ll find the right team and Netflix will guide them because there’s just too much money involved.

“Netflix isn’t going to want to see this go up in smoke.”

Yesterday, Netflix co-CEO Reed Hastings made it clear the platform has great expectations for the Duke and Duchess of Sussex.

He told CNBC’s Squawk Box: “I think it’ll be some of the most exciting, most viewed content next year.”

Speaking about the Duke and Duchess of Sussex’s approach to their new career move, Mr Hastings added: “It’s gonna be epic entertainment — so excited about that deal.

“They’re smart — they were shopping it around across all of the major companies, and I think we really put together the best complete package, and we’re going to do a wide range of entertainment with them.”

The Duke and Duchess of Sussex are believed to have already started the production of some of their new programmes through a production company yet-to-be-named.

This enterprise is set to be a separate entity from Archewell, Meghan and Harry’s charitable foundation.

Harry and Meghan said in the statement with which they announced their deal with: “Our lives, both independent of each other and as a couple, have allowed us to understand the power of the human spirit: of courage, resilience, and the need for connection.