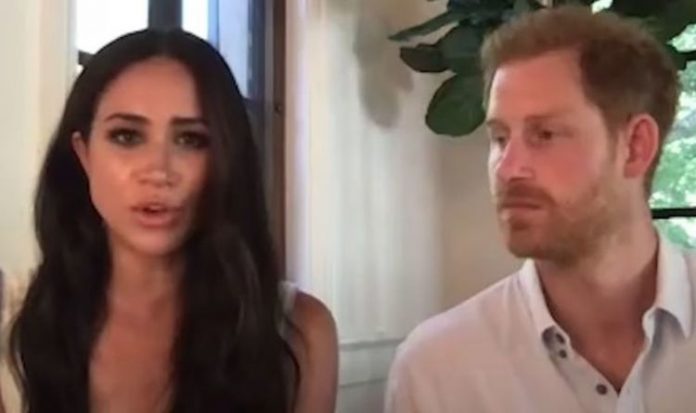 A year on from announcing their decision to step back as senior royals, the Duke and Duchess of Sussex are going full steam ahead into yet another new chapter of their lives. Sources close to the couple have said that despite their personal challenges, the pair feel “optimistic and excited” for the future following a “rollercoaster” year.

The Sussexes covered major ground last year by wrapping up their final royal engagements in March, relocating to California during the height of the Covid pandemic and purchasing a multi-million dollar home.

Meghan suffered a devastating miscarriage in July, which she said left her and her husband dealing with “an almost unbearable grief”.

The couple has also been criticised for signing a mega deal with Netflix.

The streaming giant has been accused of portraying Princess Diana in a dishonest way in their hit show The Crown.

Meghan and Harry are not looking back, an insider said.

Discussing what 2021 has in store for the couple, an insider told Vanity Fair: “We will see more of them and in a different way to how we saw them as working royals.

“It will be more in line with who they are and the way they want to operate from now on.”

Other sources close to the Sussexes told the publication that despite 2020 being a “rollercoaster”, they are “optimistic and excited” for their future.

Health-conscious Meghan will likely lean towards other organic brands, possibly run by women, when she looks for her next investment.

And Harry is set for a busy year as well as fans eagerly await the couple’s TV series, documentaries and children’s shows as part of the Netflix deal.

Given Meghan’s extensive acting experience, Harry will have more to learn when it comes to producing the shows.

The duke has in the past been involved in various media projects such as podcasts and has interviewed household names.

But being the co-producer of Netflix shows will be on an entirely different level to what Harry has done in the past.

The year ahead will also bring a huge celebration for the couple when Meghan celebrates her milestone 40th birthday in August.

While the pandemic prevented the duchess from throwing a large birthday bash last year, restrictions may be eased significantly in California by the end of the summer to allow for a party.

In 2018 Harry caused a stir when he whisked his wife away to Ibiza by private jet to celebrate her first birthday since becoming a mother.

The couple drew the wrath of fans and royal commentators for taking four private jet flights in the space of 11 days, after they headed to Nice in the south of France shortly after returning from Ibiza.