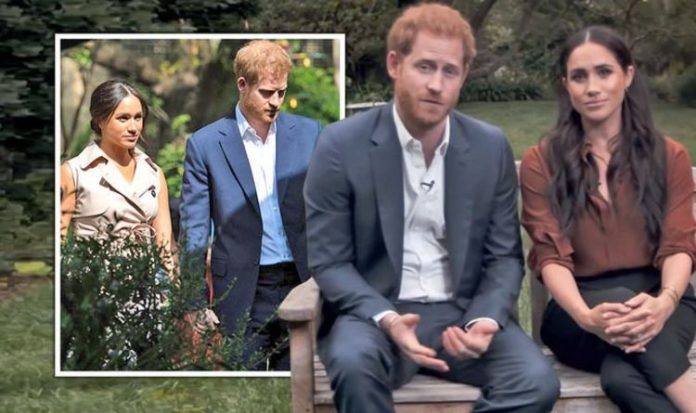 Meghan Markle and Prince Harry sparked controversy when they released a video urging Americans to vote in “the most important” US election. Some viewers took their speech to be in support of Joe Biden – even though they made no mention of either presidential candidate – as they denounced hate speech and misinformation. As a result some people believed the former senior royals had become too political. Following the backlash, Meghan defended her actions and speech claiming that nothing she has said was actually controversial.

Royal commentator Lizzie Robinson and Chris Ship from Royal Rota, reflected on this with Mr Ship warning the pair should probably stay out of US election.

While making an appearance at the Fortune Most Powerful Women Summit, the Duchess of Sussex said: “It is about being authentic and if you look back at anything I have said it is really interesting.

“It is interesting because what often ends up being inflammatory it seems is people’s interpretation of it.

“If you listen to what I actually say, it is not controversial.”

Mr Ship remarked that the upcoming presidential election would prove a very emotional issue for many.

He added: “We kind of know where Meghan is with that but the issue is Harry.

“Meghan and Harry promised that when they leave the Royal Family they would uphold the values of the Queen.

“One of the Queen’s values is being impartial.

“People pour over what they are doing whether that is from them saying they wanted to leave the Royal Family and have a private life and yet here they are or their comments on the US election.

“Anything they do or say is looked at carefully.

“Meghan has been interpreted by lots of quarters as showing support for Joe Biden and the upcoming election.”