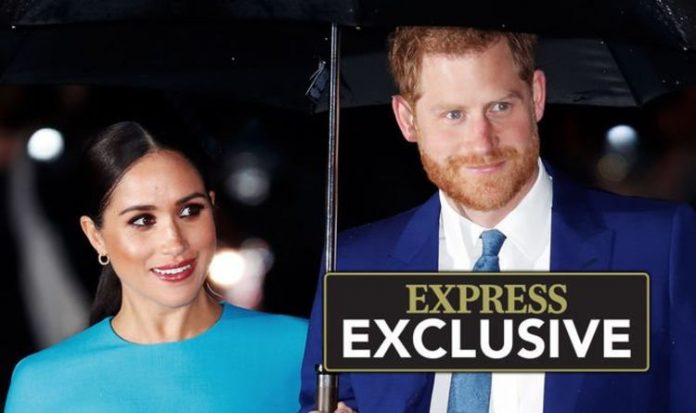 Meghan Markle and Prince Harry are still officially known as the Duke and Duchess of Sussex, despite stepping down as senior royals earlier this year. The decision to keep their official titles has been highly controversial, with many commentators calling for the pair to lose their titles for good. But an expert has claimed the couple will always have their Sussex titles.

In an exclusive interview with Express.co.uk, biographer Sean Smith has claimed Meghan and Harry will never lose their royal titles.

He said: “Harry will remain the Duke of Sussex, I don’t think there is any doubt of that.

When asked whether if he thought the couple would keep their Sussex titles, Mr Smith said: “Yes I do. But I don’t think it matters if they don’t.”

He went on to question the need for titles in the first place and said: “All that sort of title stuff is ridiculous anyway.

“The sooner we ditch it the better.”

The biographer pointed out in his new book on the Duchess, titled Meghan Misunderstood, he does not use the couples royal titles once.

As a result, the pair had to ditch their brand name “Sussex Royal”.

But the couple were allowed to keep their royal titles and are still officially known as the Duke and Duchess of Sussex.

Demands have been growing for the couple to be stripped of their royal titles in recent months, especially after their comments on the US Presidential election where they urged people to exercise their vote.

Recent polls have also suggested the British public would back a decision to strip Meghan and Harry of their royal titles.

A YouGov poll of 3,250 adults, carried out on September 29, found 48 percent of respondents thought the pair should be stripped of their titles.

Just 27 percent said they should keep them, while 25 percent responded “don’t know”.

Similarly, a poll of 4,174 British adults by Savanta Comres found 68 percent thought Meghan and Harry should lose their titles.