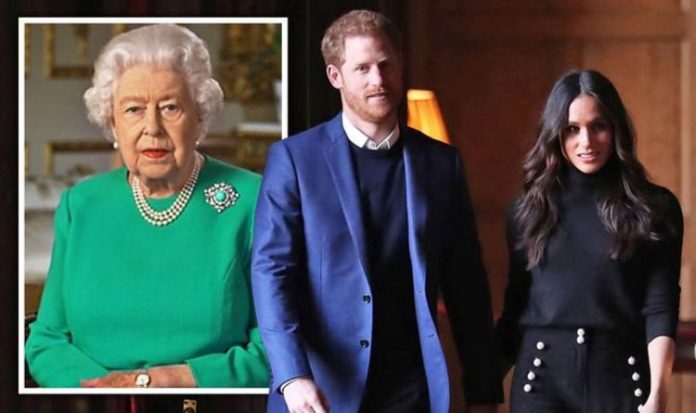 Meghan and Prince Harry have effectively put an end to speculation about their future role in the Royal Family by announcing to the Queen they have no intention to return as full-time working royals at the end of the Megxit 12-month review period in late March. As a result, the monarch made the decision to sever the Duke and Duchess of Sussex’s links to their royal and military patronages.

A statement issued by Buckingham Palace today read: “The Duke and Duchess of Sussex have confirmed to Her Majesty The Queen that they will not be returning as working members of The Royal Family.

In this statement, the Queen and the rest of the Royal Family expressed their feelings following Meghan and Harry’s definitive departure.

Meghan Markle and Prince Harry have been stripped by the Queen of their royal patronages (Image: GETTY/PA)

Meghan Markle and Prince Harry are no longer the vice president and president of the Queen’s Commonwealth Trust (Image: GETTY)

The announcement ended by saying: “While all are saddened by their decision, The Duke and Duchess remain much-loved members of the family.”

A Buckingham Palace source said the Queen made her decision following “conversations between the Duke of Sussex and members of The Royal Family.”

Minutes after the palace made this groundbreaking announcement, Meghan and Harry issued their own statement.

Following the Queen’s decision, Prince Harry has lost his three honorary military titles of Captain-General of the Royal Marines, Honorary Air Force Commandant of RAF base Honington and Honorary Commodore–in–Chief of Small Ships and Diving.

Similarly, Meghan has lost the two patronages inherited from the Queen in January 2019 – the National Theatre and the Association of Commonwealth Universities.

Moreover, following the end of the Megxit 12-month review period, the Duke and Duchess of Sussex will no longer be President and Vice President of the Queen’s Commonwealth Trust.

The review period was agreed by senior royals in January last year as a mean to make sure the agreement in place detailing Meghan and Harry’s exit as senior royals worked for both parts involved.

Many of the organisations losing Meghan and Harry as their patrons have reacted to Buckingham Palace’s statement.

Meghan Markle and Prince Harry got married in 2018 (Image: GETTY)

“The Duchess championed our work with communities and young people across the UK, and our mission to make theatre accessible to all.

“As Buckingham Palace have stated, the process of appointing a new patron is ongoing and will be announced in due course.”

The Rugby Football Union wrote on Twitter: “Prince Harry will be stepping down from his role as RFU Patron.

“We would like to thank Prince Harry for his time and commitment to the RFU both in his position as Patron and Vice Patron.

The Queen with Meghan, Harry, William and Kate at the 2019 Trooping the Colour parade (Image: GETTY)

“The RFU has greatly valued his contribution to promoting and supporting the game.”

On January 8, 2020, Prince Harry and Meghan first announced their intention to step back as senior royals and carve out a progressive new role for themselves within the Royal Family.

This would have seen them retaining their patronages and ability to carry out royal duties – while also being allowed to live abroad and pursue financially profitable ventures.

Following a few days of discussions between senior royals and a summit in Sandringham attended by the Queen, Prince Charles, Prince William and Prince Harry, Buckingham Palace released a statement detailing the terms of the Sussexes’ exit.

The Duke and Duchess can no longer represent the Crown and the Queen and have been asked not to use their HRH styles.