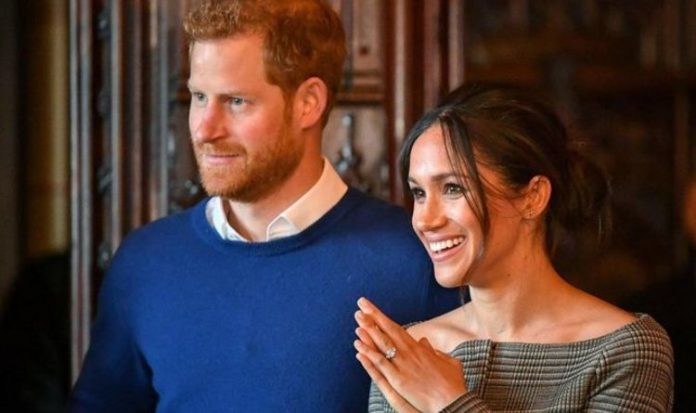 Meghan, the Duchess of Sussex, and Prince Harry signed up to the New York-based speakers’ bureau, Harry Walker Agency (HWA), in June following in the footsteps of the Obamas. A four-page ‘Virtual Event Request Form’ was released by the agency and asks event organisers to specify a fee and full sponsorship details.

The document seen by the Daily Telegraph, also asks for information on what “connection format” will be used during the event and details about any contingency plans in case there is a technical failure.

The Duke and Duchess of Sussex stepped down as senior members of the Royal Family in March.

The couple reportedly want a final say on who introduces and moderates their speeches during events.

The news comes after the Sussexes signed a multi-year deal with the online streaming giant Netflix.

The couple will be producing content for the site in a deal said to be worth $150million.

According to the leaked document, each engagement the Sussexes take part in could reportedly earn them $1million.

After quitting the Royal Family, the couple agreed not to engage in commercial activities which could embarrass the Queen.

In February, Prince Harry was reportedly paid a six-figure sum after speaking at a JP Morgan event about his therapy following the death of his mother Princess Diana.

After signing their Netflix deal, the Sussexes announced that they fully repaid the £2.4million taxpayers’ money used to renovate Frogmore Cottage.

The couple were originally paying back the cash in monthly instalments.

They paid £18,000 a month which also covered rent for the property.

But a spokesman for the Sussexes confirmed the money was paid in full to the Sovereign Grant.

It would have taken the Duke and Duchess 11 years to pay back the taxpayers’ money if they had continued paying the monthly instalments.

The spokesman said the Sussexes will be continuing to use Frogmore Cottage as a UK base.

He said: “A contribution has been made to the Sovereign Grant by the Duke of Sussex.

“This contribution as originally offered by Prince Harry has fully covered the necessary renovation costs of Frogmore Cottage, a property of Her Majesty the Queen, and will remain the UK residence of the Duke and his family.”

He also announced the Sussexes will pay an undisclosed “commercial” rent for the Windsor property.