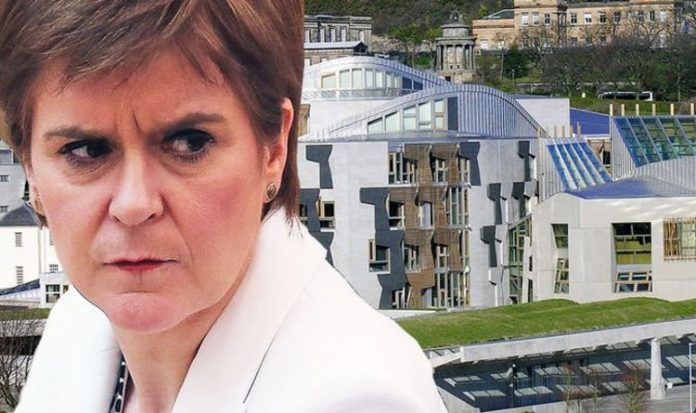 The Scottish First Minister has pushed hard for a second independence vote since the UK voted to leave the EU in 2016. Ms Sturgeon and the Scottish National Party (SNP) have argued that, given the party’s dominance in Holyrood, it has the mandate to take Scotland out of the union and back into the EU as an independent nation. After the 2019 general election, which the SNP won comfortably in Scotland, Ms Sturgeon formally requested powers from Westminster to hold a second independence referendum – but the notion was firmly rejected by the Prime Minister, Boris Johnson.

Mr Johnson said: “You and your predecessor (Alex Salmond) made a personal promise that the 2014 independence referendum was a ‘once in a generation’ vote.

“The people of Scotland voted decisively on that promise to keep our United Kingdom together, a result which both the Scottish and UK governments committed to respect in the Edinburgh Agreement.”

Since then, Ms Sturgeon has attempted to gain powers to call a second independence vote with a section 30 order.

But the patience of some independence advocates had already worn thin, as prominent independence supporters indicated their displeasure at the perceived lack of action by the First Minister.

After December’s election, Ms Sturgeon pleaded for more patience from Scottish nationalists, saying “to pretend that there are shortcuts or clever wheezes that can magically overcome the obstacles we face would be to do the independence cause a disservice”.

Stuart Campbell, who launched the site in 2011, said: “Five years and two months have passed since Sturgeon assumed the office of First Minister on 20 November 2014.

“Since that day, the people of Scotland have gone to the ballot box on SIX occasions, and on every one the SNP have won a clear victory – in four of those six elections, by a margin of more than 20 percentage points over their nearest opponent.

“And yet the party whose primary/sole reason for existence is achieving independence for Scotland has taken those six resounding mandates in half a decade and delivered absolutely nothing with them.

“For all those millions of votes, Scotland is not one inch closer to its independence now than it was on 19 November 2014.”

He added: “The Scottish Government sat on its hands and did nothing but accumulate a pile of worthless mandates while the clock ticked down, and now Scotland stares into the abyss of another decade of destructive Tory rule.”

But the sustained growth in support for independence will still not be enough on its own to secure a second referendum, public law expert Professor Aileen McHarg told Express.co.uk.

She said: “The growth in support does not change the legal arguments. Either they have the power or they don’t – a mandate makes no difference.”